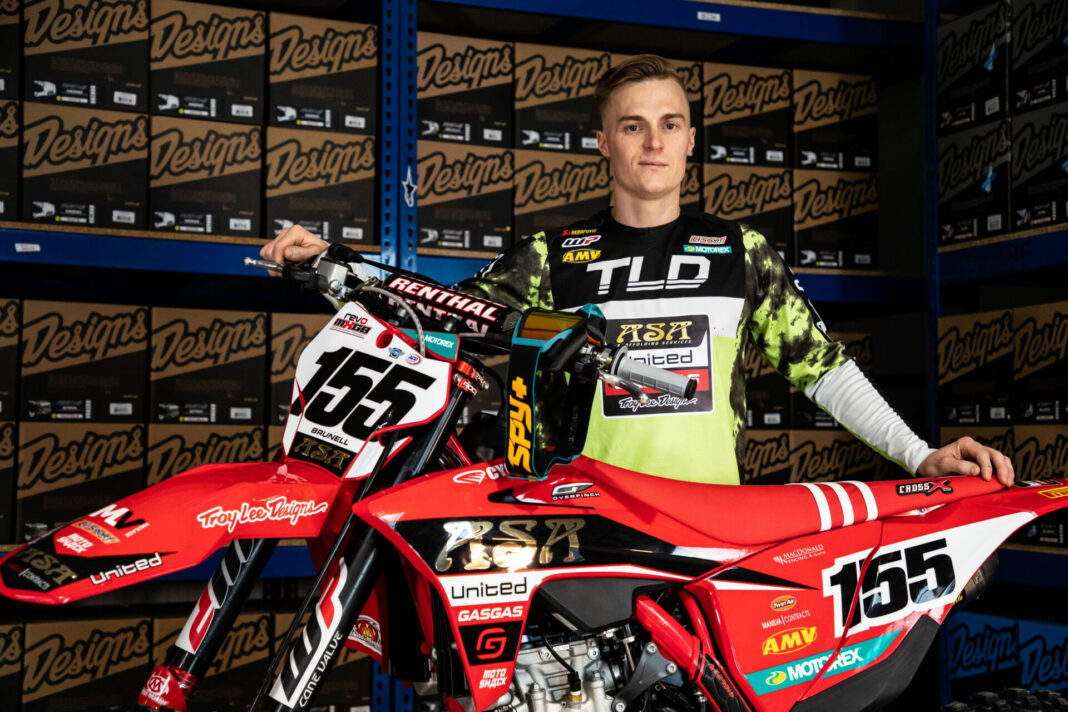 From debuting as the Official GASGAS UK Motocross Team, to their multiple successes across numerous Championships in 2021, it has been a rewarding season for the squad.

Team Principal, Lee Tolan is extremely proud of all his team has accomplished in the past 12 months and looks forward to another exciting season of racing in 2022…

“The team performed beyond expectation this year, Steven’s results in the British Championship gifted us a number of podiums and our first ever British overall. Of course, his injury at the end of the year cost him second in the Championship, but we are still proud of all he achieved and couldn’t have asked for much more.

It goes without saying, everything Bobby Bruce has accomplished has been astounding. His EMX125 campaign has been a season highlight and we are proud to announce that Bobby will be staying with us for his debut season on a 250f. His efforts will be concentrated toward the EMX250 championship in 2022 and we look forward to supporting him once again at European level.

Jack Brunell had an enjoyable season on the 450 this year, however he will turn his attention to Supercross in January. A lifetime ambition of Jack’s, we are humbled to support him in this chapter of his career in honour of his late father, Melvyn Brunell. It is a privilege to have Jack representing the team stateside and we wish him every luck in his American adventure.

We would also like to welcome our latest Pro MX1 signing, John Adamson to the fold for the upcoming season. John finished second overall in the British MX2 Championship this year and continues to demonstrate his desire to succeed as a professional rider, as he makes the move into the 450 Class in 2022.”

“I’m excited and proud to be moving to ASA United GASGAS. They have a brilliant track record and have worked with some of the top riders in Britain. I’m looking forward to learning and working with the team to continue on from a great 2021. I believe the set up and the people involved in the team give me the best chance to preform to my full potential.

I knew Lee before joining the team, and we share the same extreme passion for motocross. Since joining the team we have naturally spent more time together and we feed off each other’s positive energy. Lee rides to a good standard himself so has a good eye when watching and isn’t shy to share his opinion, which will help when I get back riding for tips and comparisons to others.

I moved back to the 450 as I consider it the premier class and always see myself ending up there. I’ve had good rides in the past on the 450. With the team and program, I look to bring in consistently good results on a weekly basis.”

John’s positive attitude and dedication to his training/bike time works well with the dynamic that the team is known for. We’ve no doubt that John will always present himself professionally on the team’s behalf and we are excited to have the opportunity to work with him.

The team’s adult line-up will also be complimented by a trio of youth riders, comprised of Tyla Hooley, Archie Edwards and John Slade. Archie and John have been representing ASA United GASGAS for the past year and we are proud to say that they will continue to fly the flag for us next season too.

Tyla, of course if the latest addition to the youth squad and will look to quickly assert himself in the MXY/125 ranks after a successful season on the 85. We are pleased to have Tyla on board and look forward to seeing how he progresses as the year unfolds.

The team will continue to post frequent updates over the coming weeks, following Jack’s journey to the states, Bobby’s transition to the 250f and John’s return from injury (forecast for late January).

We’d like to thank all the individuals and businesses that have supported the team for 2021 and those who have stayed/joined us for the upcoming season. Your support plays a substantial part in making in this all possible and for that, we are especially grateful.

We look forward to yet another year of exhilarating racing.