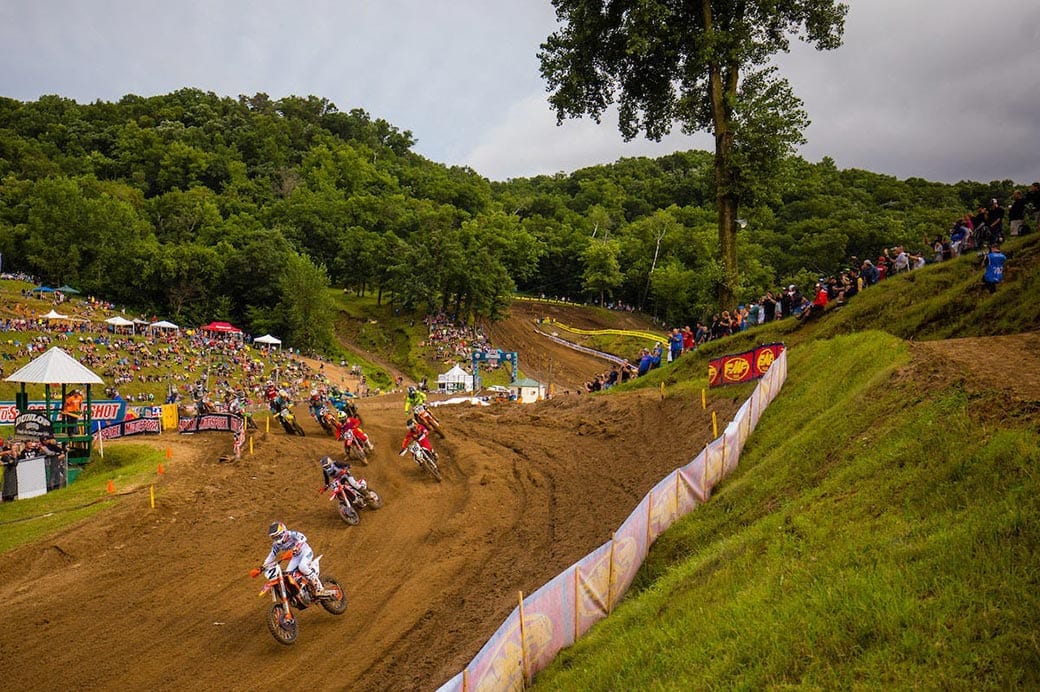 The Lucas Oil Pro Motocross Championship, sanctioned by AMA Pro Racing, held its eighth round of the 2019 season at Spring Creek MX Park for the 37th running of the Frescados Tortillas Spring Creek National on Saturday.

A series of thunderstorms, accompanied by nearby lightning, forced race officials to adjust the race day schedule, which ultimately delayed the start time of the opening moto one hour. The heavy rainfall provided riders with challenging track conditions throughout the afternoon, where the 450 Class saw Red Bull KTM Factory Racing’s Cooper Webb sweep both motos for his first career victory in the premier class. In the 250 Class, Monster Energy/Pro Circuit/Kawasaki’s Adam Cianciarulo prevailed to take his sixth victory of the season, extending his lead in the championship standings.

As the gate dropped on the opening 450 Class moto, JGRMX Suzuki support rider Isaac Teasdale emerged with the first MotoSport Holeshot of his career over Webb and Paulson Rock/FXR Racing’s local hero Henry Miller. As the 40-rider field charged out of the first turn, Webb blasted by Teasdale to take over the top spot and lead the opening lap. Miller was credited in second, while TPJ Racing rider John Short moved into third, just ahead of Teasdale.

Webb immediately took advantage of a clear track and quickly opened a gap over his competition, while Miller maintained his hold of second. Teasdale managed to get back around Short for third, however, it would be short-lived as Monster Energy Kawasaki’s Eli Tomac was on the move and wasted no time overtaking both riders.

Tomac’s march to the front continued as he tracked down Miller and took over the second position with an aggressive move around the outside of the first turn. Shortly after, Miller had company from Red Bull KTM Factory Racing’s Marvin Musquin, who made the pass for third, shuffling Miller to fourth.

Over the ensuing laps Tomac used every inch of the racetrack to close in on Webb, and as the moto neared its completion Tomac found himself searching for a way past the race leader. However, Webb withstood the challenge and responded by picking up his pace, which kept Tomac at bay. When the checkered flag waved, it was Webb who held on to take the first 450 Class moto victory of his career by 11.8 seconds over Tomac. Musquin remained unchallenged en route to third. Rockstar Energy Husqvarna Factory Racing’s Zach Osborne was fourth, while Miller finished an impressive fifth in front of the home crowd.

Moto 2 saw Webb carry the momentum from his first moto win to take his class-leading sixth MotoSport Holeshot over Team Honda HRC’s Ken Roczen and Short. As Webb and Roczen set the pace out front, several riders found themselves collected in a first turn pileup, including championship contender Musquin. Tomac was mired deep in the field as well, and fought to put himself inside the top-10 at the end of the opening lap.

Behind the lead duo, the battle for third began to heat up as Osborne closed in on Short, and eventually made the pass stick for third. Despite Webb’s strong riding out front, Roczen started bridging the gap and was able to make a successful pass attempt for the lead. Just a few corners later, Webb aggressively dove to the inside of Roczen to retake the lead.

While pushing the pace up front, Webb came up short on the landing of one of the uphill jumps, which forced him to the ground and allowed Roczen to inherit the lead. Webb was able to remount in second with Osborne just behind. As the race entered its final stages, Webb was relentless and chipped away at Roczen’s advantage. He soon found himself once again contending for the moto win and set his sights on the lead. With just two laps remaining, Webb made the pass stick on Roczen navigating the sand rollers. He quickly distanced himself, but Roczen laid it all on the line on the final lap to close to within less than a bike length as they navigated the final few corners.

Webb pushed all the way until the checkered flag, and was able to narrowly edge out Roczen by 0.3 of a second. Osborne finished in a distant third. Tomac, who endured through a tip over of his own, only managed to fight his way up to fifth in the conditions.

The 1-1 moto scores by Webb netted him both the first overall podium and overall victory of his career. He becomes the 69th different 450 Class winner in Pro Motocross history, and just the second to do so at Spring Creek MX Park.

“I really wanted that second moto win,” explained Webb. “I definitely put on a hard charge in Moto 2, but it was really nice to get the job done with a 1-1 and take both motos. With the success I had earlier this year [in AMA Supercross], it definitely elevated my expectations. There was a lot of stuff to figure out at the beginning of the outdoor season with setup, but I feel like we’re in a good position with where we’re at now. The break allowed me to get the bike in a good spot and kind of get myself mentally recharged.”

Osborne (4-3) and Tomac (2-5) ended up in a tie for the runner-up spot. However, Osborne’s better second moto finish of third gave him the tiebreaker, dropping Tomac to third.

Tomac’s unblemished podium streak in 2019 was good enough to extend his lead in the 450 Class standings to 38 points. Musquin, who finished fourth overall (3-7), remains second. Roczen, who finished fifth (14-2), continues to hold onto third and trails Musquin by 11 points.

The first 250 Class moto saw Cianciarulo prevail with his third MotoSport Holeshot while battling alongside GEICO Honda’s Hunter Lawrence, and just ahead of Monster Energy/Star/Yamaha Racing’s Justin Cooper. Lawrence was able to edge out into the lead, where he and Cianciarulo quickly set the pace out front. Behind them, JGRMX/Yoshimura/Suzuki Factory Racing’s Alex Martin began to apply pressure on Cooper for third, taking control of the position in front of his hometown crowd before the end of the opening lap.

As Lawrence continued to ride strong and attack the muddy conditions, Cianciarulo gave chase and matched the leaders pace for the first half of the 30-minute-plus-two-lap moto. Martin started to find his pace and slowly began closing the gap to Cianciarulo, but every time he would look to make a move, Cianciarulo responded and pulled back away. With just four minutes remaining, Cianciarulo lost the front end and found himself on the ground, allowing Martin to take over second. Cianciarulo was able to quickly remount in third.

Out front, Lawrence remained consistent to take his second moto win of the season. He crossed the line 13.4 seconds ahead of Martin, who matched a season-best moto finish. Cianciarulo rebounded from his late-race dismount to complete the podium in third. Troy Lee Designs/Red Bull/KTM’s Shane McElrath was fourth, while Monster Energy/Star/Yamaha Racing’s Dylan Ferrandis rounded out the top five.

Cooper launched out of the gate to take his class-leading fifth MotoSport Holeshot to start Moto 2, followed by Cianciarulo and JGRMX/Yoshimura/Suzuki Factory Racing’s Kyle Peters. Lawrence, who won the opening moto, was credited with 10th at the end of the opening lap, while Martin started just outside of the top five after running off of the track in the first turn.

A clear track allowed Cianciarulo to go on the attack early. He made an assertive pass on Cooper to grab the lead and proceeded to break away from the riders behind him, opening a comfortable lead in the early part of the moto. While Cooper continued in second, Martin began to pick riders off one-by-one and soon moved into third. The Millville native then set his sights on Cooper for second, latching onto the Yamaha rider as he looked for a way around.

With eight minutes remaining, Martin and Cooper came together, which sent Cooper to the ground and caused him to lose several positions. Martin continued on in second, while Monster Energy/Star/Yamaha Racing’s Colt Nichols moved up to third. Just moments later, a miscue by Martin allowed Nichols to take over second, but a persistent Martin struck back to retake the position with just three laps to go.

Cianciarulo carried on to take his sixth moto win of the season by 11.7 seconds over Martin, while Nichols finished in a strong third. At the completion of the moto, race officials announced that Martin would get a one-position penalty for his off-track excursion in the first turn at the start of the race, which moved Nichols into season-best finish of second and dropped Martin to third.

Cianciarulo’s 3-1 scores gave him the seventh overall victory of his career, and his sixth in eight rounds this season. It’s the fifth time this summer that Cianciarulo has used a second-moto win to carry him to the overall victory.

“I’m not really an angry person, but after that first moto I was mad,” exclaimed Cianciarulo. “I just put my music on and focused on coming back for redemption in Moto 2. The second moto went much better and I just put my head down and kept focused the entire moto. It’s incredible to get a sixth overall win of the season, and I’m just looking forward to keeping the momentum rolling as we finish off the summer.”

Martin earned his first overall podium result of the season at his home track in second (2-3), edging out Lawrence in third (1-6).

Cianciarulo continues to lead the 250 Class standings and extended his lead to 36 points over Ferrandis, who finished fourth (5-4). Cooper, who finished seventh (7-10), sits third, 46 points out of the championship lead.

Next up for Lucas Oil Pro Motocross Championship

The 2019 Lucas Oil Pro Motocross Championship will continue next weekend on Saturday, July 27, from the Pacific Northwest’s Washougal MX Park in Washougal, Washington. First motos of the MotoSport Washougal National can be seen live on MAVTV at 1 p.m. PT / 4 p.m. ET. Second moto coverage will be shown via tape delay on NBCSN at 7 p.m. PT/ 10 p.m. ET. All of the action can also be live-streamed with the “Pro Motocross Pass” via the Gold channel on the NBC Sports app.