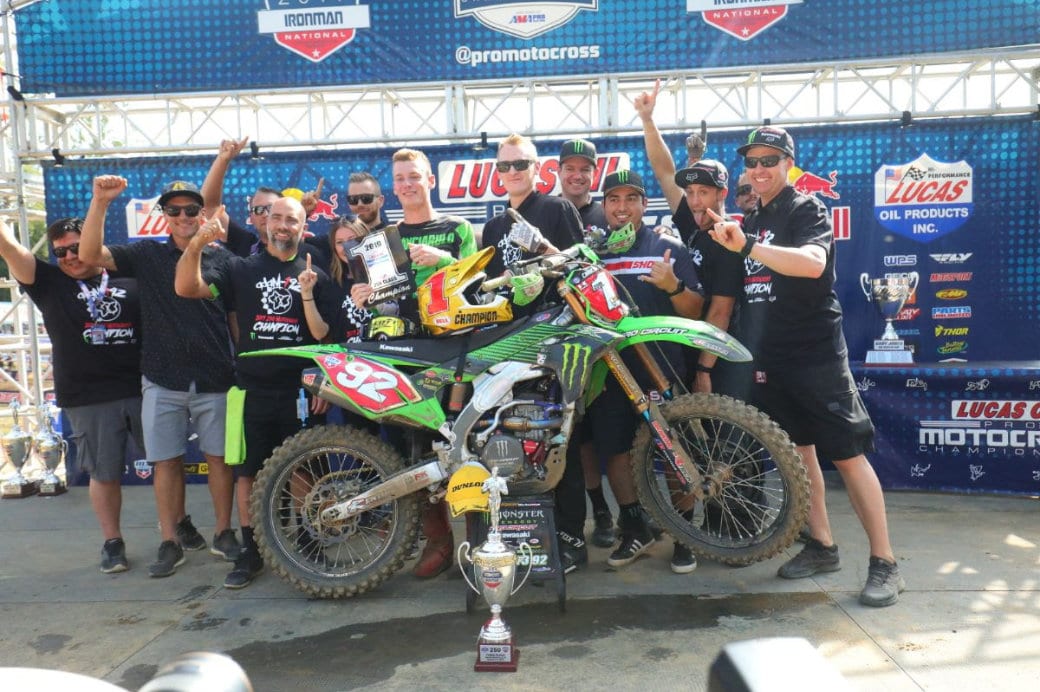 The focal point of the fifth anniversary of this event was the battle for the 250 Class title between Monster Energy/Pro Circuit/Kawasaki’s Adam Cianciarulo and Monster Energy/Star/Yamaha Racing’s Dylan Ferrandis. The lone riders mathematically eligible to capture the Gary Jones Cup were both chasing their first career national title, with a 30-point cushion sitting in Cianciarulo’s favour. When all was said and done, Cianciarulo made life easy on himself by clinching his first professional title at the conclusion of the opening moto.

The battle for the victory at Ironman saw Ferrandis do exactly what he needed to do coming into the afternoon, riding to an impressive 1-1 sweep of the motos and his fourth 250 Class victory of the season. In the 450 Class, with the championship already decided one week ago, Monster Energy Kawasaki’s Eli Tomac capped off his historic three-peat with an emphatic win.

The Kawasaki team-mates engaged in a battle for second for a couple laps and kept Roczen within reach throughout. Eventually, Tomac made the move around Savatgy, which allowed him to settle into a rhythm to try and close in on the lead. A couple laps later Musquin got by Savatgy for third and began his quest to track down his primary rivals up front.

The leaders found themselves mired in lapped traffic early on, which ultimately played a significant role as the moto continued. Tomac successfully closed in on Roczen and applied heavy pressure for the lead, but lapped riders put some distance between them and also allowed Musquin to close in from third. Throughout the second half of the moto the top three sat within mere bike lengths of one another in what became the most competitive moto of the entire season. Lapped traffic continued to alter the pace of all three riders, which saw the distance between each of them fluctuate each and every lap.

With mere minutes left in the moto, Musquin was able to take advantage of Tomac’s pass on a lapper to dive to the inside and steal second. He then chased Roczen for a lap before making another impressive pass as they came to take the 2-lap board. Once by, Musquin was able to establish a bit of a gap on Roczen, but the German battled back on the final lap. He attempted to make a pass on the final turn, but Musquin prevailed with an impressive moto win that saw him move from third to first in a matter of two laps. Roczen finished second, seven-tenths back, while Tomac followed in third. Savatgy earned a career-best moto finish in fourth, with Rockstar Energy Husqvarna Factory Racing’s Zach Osborne fifth.

The 24th and final moto for the 450 Class began with Savatgy once again claiming the MotoSport Holeshot, followed closely by Osborne and Musquin. As they battled for the position behind Savatgy, Osborne and Musquin came together which caused Musquin to crash. He was unable to return to the race, ending both his hopes of victory and securing the runner-up spot in the final championship standings.

Savatgy carried on out front, and Tomac was able to fight his way up to second. However, all attention was on Roczen as the German stormed his way from fourth to second before the completion of the opening lap. He continued to push and made the pass on Savatgy on the following lap. Tomac gave chase and was able to pass his team-mate for second, while Osborne eventually dropped Savatgy off the podium with a pass for third.

Much like the first moto, Tomac closed in on Roczen and the two multi-time champions traded fast laps, separated by just a handful of bike lengths. Osborne stayed close to keep the lead duo honest. With 10 minutes left in the moto Tomac attempted to mount a challenge, trying alternate lines in his search for a way around. After a few laps Tomac’s persistence paid off and he made the move by the German. That opened the door for Osborne to apply pressure on Roczen from third. The rookie 450 Class rider made the pass happen and gave chase for the lead.

Tomac dropped the hammer in the closing stages of the moto and stormed to his 11th moto win of the season by 8.1 seconds over Osborne. Roczen held on to finish third.

It’s the sixth overall victory of the season for Tomac (3-1), and the 23rd of his career, which gives him sole possession of fourth on the all-time 450 Class wins list.

“Even though the title was clinched it was still a fun day. We came in here with the plan to do the same thing. The mindset was to attack,” said Tomac. “The first lap [in Moto 2] was chaos with Marv [Musquin’s crash] and then Kenny [Roczen] got by. He’s just so good in the early laps. I was able to stay on him and then got by. What a day and what a year.”

Roczen finished in the runner-up spot overall (2-3), while Osborne’s strong performance in the final moto landed him third (5-2).

Tomac ended the season with the largest championship margin of his three titles at 58 points over Roczen, who surpassed Musquin in the final standings. Musquin, who finished ninth (1-40), rounds out the championship podium in third, 70 points behind Tomac.

The first 250 Class moto of the afternoon saw JGRMX/Yoshimura/Suzuki Factory Racing’s Kyle Peters prevail with the MotoSport Holeshot, followed by Troy Lee Designs/Red Bull/KTM’s Mitchell Falk and Ferrandis. Right behind the top three was Monster Energy/Star/Yamaha Racing’s Justin Cooper and Cianciarulo. As Peters solidified his hold on the lead, Ferrandis quickly charged up into second. Behind him, both Cooper and Cianciarulo moved forward into second and third, respectively.

Peters held on to the lead for a lap, but Ferrandis made his move and put his Yamaha right where it needed to be out front. It didn’t take long for both Cooper and Cianciarulo to also make their way around Peters and set the stage for what would ultimately be the deciding battle for the championship. Ferrandis appeared to have control of the moto, but he soon came under fire from a hard-charging Cooper. The team-mates went at it for several laps, with Ferrandis able to fend off numerous pass attempts. Eventually, Cooper’s persistence paid off and he took the lead just over a quarter into the moto.

Cooper continued to charge ahead and soon opened up a comfortable lead. However, after they passed the halfway point of the race Ferrandis picked up his pace and went to work on chipping away at the deficit. As the 30-minutes-plus-two-laps moto surpassed the 20-minute mark Ferrandis was back on the rear fender of his team-mate. With about seven minutes to go he pulled the trigger on a pass and took away Coopers line, reclaiming the top spot. The Frenchman was able to quickly distance himself, and it soon put Cooper within reach of Cianciarulo, who started to make a late push in recognition of what transpired ahead of him.

While Ferrandis continued to lead in the waning moments of the moto, Cianciarulo caught Cooper and was able to make the pass for second with a minute remaining. Cianciarulo continued to close on Ferrandis over the final two laps, but he didn’t need anything better than second to wrap up the title. Ferrandis carried on to his class-leading eighth moto win of the season by 3.6 seconds over Cianciarulo, who mathematically eliminated Ferrandis with the result. Cooper soldiered home in third, with GEICO Honda’s Chase Sexton fourth and Rockstar Energy Husqvarna Factory Racing’s Michael Mosiman fifth.

Ferrandis established a solid hold on the lead, and it didn’t take long for him to move out to a multiple second advantage over his rivals. In their chase of the Frenchman, Cianciarulo and Cooper engaged in a spirited battle for second. The Kawasaki rider made multiple attempts to get by Cooper, but was unable to find a way around. Cooper eventually put some distance between he and Cianciarulo and proceeded to track down Ferrandis for the lead. Cianciarulo continued to lose ground, ultimately giving up third to Sexton.

A few bike lengths for several laps separated the Yamaha team-mates, but Ferrandis was able to stabilize his lead late in the moto and carry it through to the finish for a wire-to-wire victory by 4.9 seconds over Cooper. It was his ninth moto win of the season. Sexton followed in third, with Cianciarulo finishing fourth.

It was Ferrandis’ fourth overall win over the final six rounds of the summer, three of which came via 1-1 sweeps.

“I knew [winning today] wasn’t going to be enough to win the championship today. AC [Cianciarulo] rode great all season, and he deserved [the title]. He was too hard to beat,” said Ferrandis. “This was the best season of my career. We showed good things this year. We won races and we showed that next season everyone can look at me to possibly win the championship.”

Cooper gave Star Racing a 1-2 finish in the finale in second (3-2), while Cianciarulo capped off his stellar season in third (2-4).

Cianciarulo’s championship campaign was highlighted by his unparalleled consistency, in which he finished on the overall podium at all 12 rounds. That’s the first time a champion has accomplished such a feat since Eli Tomac won the title during the 2013 season. Cianciarulo becomes the 31st different champion in the 250 Class, and also ends a six-year drought for his Monster Energy/Pro Circuit/Kawasaki squad, the winningest team in class history with 11 championships.

“It’s been a journey, for sure. Like I’ve said, when I was a kid I knew I’d be here [winning championships], but then things got taken from me and I didn’t know if I could anymore. I would have rather gone through what I went through to get to this point, because it made me a better human,” explained Cianciarulo. “I’ve learned so much about myself and I’ve had to grow. The [adversity] has catapulted me into doing something I didn’t think I could do, which is win this outdoor title. I’ll hold onto this forever. No one can ever take this from me.”

Cianciarulo ended the season with a 20-point margin over Ferrandis, while Cooper completed the championship podium in third, 58 points out of the lead.

With the championship in both the 250 Class and 450 Class, Kawasaki becomes the first manufacturer to sweep the titles since 2011, when Kawasaki accomplished the same feat with Dean Wilson (250 Class) and Ryan Villopoto (450 Class).