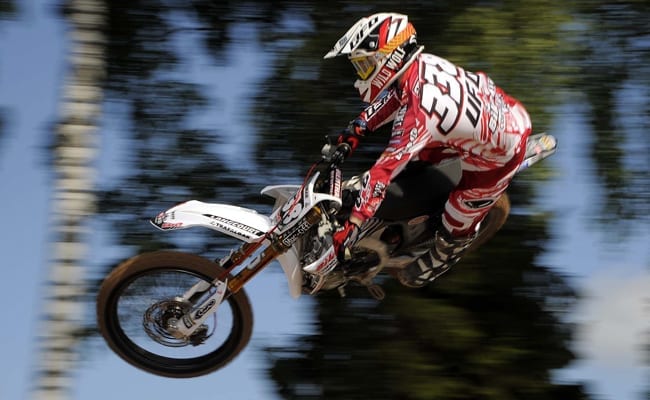 Monster Energy Yamaha are delighted to welcome a new second faction for 2012 with Steve Dixon’s team turning ‘black and green’ with their Cosworth-powered YZ250F machinery.

After confirmation of the factory Rinaldi-helmed team fielding Steven Frossard, David Philippaerts and Christophe Charlier, Yamaha Motor Europe (YME) are pleased to confirm the second half of their Monster Energy line-up for the 2012 campaign.

Dixonretains his rider roster of 21-year-old Zach Osborne and 20-year-old Arnaud Tonus and has added 23-year-old Shaun Simpson to his line-up. Shaun, who leaves LS Honda, will race a YZ450F with a Rinaldi prepared factory engine in MX1.

Dixon’s long history with Yamaha in GP racing means that he has overseen the emergence and success of riders such as Paul Malin, Carl Nunn, Brian Jorgensen, Billy MacKenzie, the late Andrew McFarlane and of course Osborne who joined the unit in 2008 and won the 2009 Turkish Grand Prix as well as finishing fourth in the world in 2010.

“We need to win a world championship and our team has reached a very high level in the last couple of years,” says Steve. “This is thanks to some excellent support from our backers but this move is a fantastic chance to work closer with YME and the factory.

“We have two very promising riders for MX2 in Zach and Arnaud who I believe will be ready to move up a level and be in regular contention for podiums next season and the addition of Shaun means we will have an important British link and a rider who still has so much to show as a GP racer. MX2 GP is very competitive and it is important to be fast and remain fit and keep that consistency. This is a new step for our team. I have been in this sport a long time and I think it is a great opportunity.”

“With the Monster Energy Yamaha effort in MX2 we add experience through Zach and Arnaud, both top runners this year and now with Shaun confirmed we have another young and promising rider for MX1,” says Yamaha Motor Europe Racing Manager Laurens Klein Koerkamp. “The Yamaha-Dixon relationship has existed for 20 years – many of them with strong YME involvement and others with a focus of support through Yamaha Motor UK. From a perspective of increased efficiency it makes sense to tighten our relationship even further again and bring Steve and his team through YME under the Monster Energy Yamaha banner.

“Steve has a massive experience in both team and rider management in motocross, has strong technical partners and we hope together we can go for the MX2 world title and prepare Shaun for top results in MX1.”