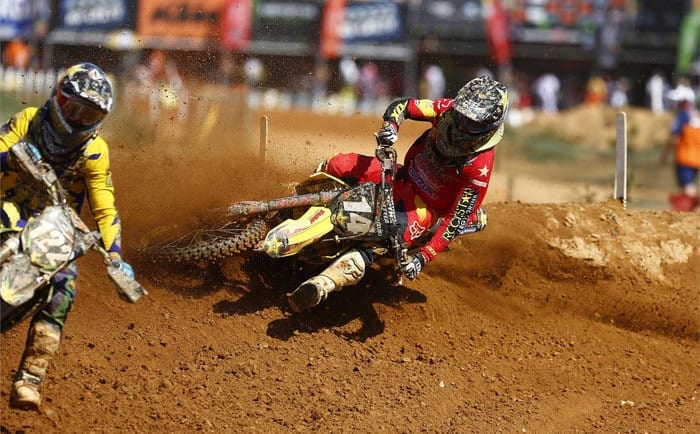 There were contrasting fortunes for Rockstar Energy Suzuki Europe at Agueda for the Grand Prix of Portugal and across the continent in other competitions today.

Under hot sunshine for the sixth round of 17 in the FIM Motocross World Championship Max Anstie classified 10th overall on the factory-backed RM-Z250 while Jeremy Seewer was able to kick off his European EMX250 campaign – the feeder series to the MX2 class – with a podium result and third place.

Agueda, with 15,000 spectators through the weekend, was a bumpy, rutty and very rough prospect that was a challenge both physically and mentally through the limited overtaking chances away from a faster single line.

Anstie was hampered by mediocre starts in his motos: The Brit had earlier showed good pace around the undulations with top three lap-times in the practice sessions. For the 35 minute and two-lap races Anstie fought through to ninth and 11th positions, recovering from a second moto crash to get near the top 10.

“Everything went well yesterday and I put in good times and we were third in both timed sessions; even when I went down in the qualification heat I was able to get up and move my way through. In both races I just felt like I was struggling. We didn’t get out of the gate and I don’t know why because we have been working so much on the start – it is all I have been doing during the week. On the track I felt like I was coming through OK but having to push very hard to pass. I made a few mistakes and went down in the second moto when I clipped some guy in the air. I was in the wrong place at the wrong time for a few moments today and it set me back. A shame; it could have been a much better weekend.”