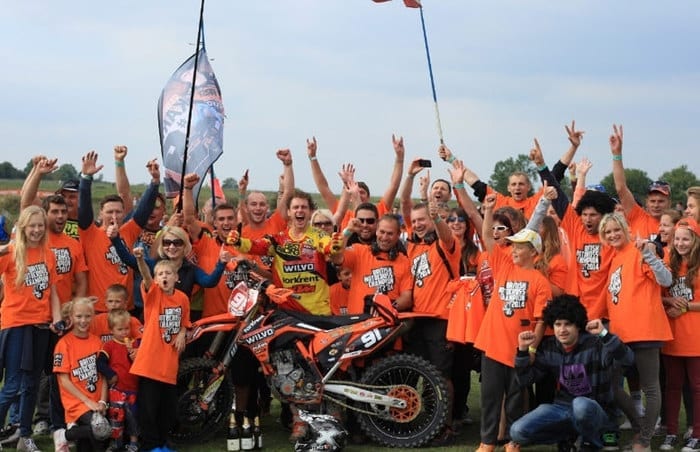 During the morning qualifying session, both Karro and Sterry produced a number of consistent lap times and transferred to the Superpole session with 1st and 11th fastest. In the Superpole session Karro was able to improve his time by two seconds and take pole position over Championship rival Mel Pocock by 1.3 seconds, while Sterry improved his position to finish in 10th place.

After the lunch it was time for the first of the MX2 races and as the gate dropped, Karro produced a lightning start and quickly settled into the lead producing a solid ride. Opening up a seven-second lead he took a comfortable race win and extended his series lead to 42 points.

For Sterry, the 18 year-old had to contend with being boxed in on the first corner and having to work hard to recover from a top 15 start. He went on to finish in a solid eighth place, just one place behind his main rival Bradshaw, reducing his lead by one point to a 15 point gap.

Following on from his race one win, Karro went into the second race with a strong chance of clinching the title. After making another strong start, Karro made a mistake on the opening lap climbing one of the hills when he went off the side of the track pushing him down to seventh place.

At the front, Sterry was riding well inside the top three and looking to gain more valuable points in the Championship. Karro charged through to third and onto the rear wheel of Pocock, passing his team-mate on the way. The smart move would have been to sit back but Karro had other ideas and soon made a pass, allowing Pocock the opportunity to challenge his rival, t-boning him and dumping him on the deck. After remounting in ninth, Karro rode to the checkered flag with enough points in the bag to take the Championship win.

While the team waited to celebrate Karro’s title, along with his hoards of loyal Latvian fans that flooded the track to salute their hero, as in the first race, Sterry consistently managed the gap to Bradshaw finishing three places behind the Honda pilot in a solid sixth.

With the pressure off Karro the team’s attention turned to Sterry as he battled to finish ahead of Bradshaw to secure third in the Championship. When the race started Karro produced a great start and took the lead, but the race was unfortunately red flagged for an injury. At the restart, Karro made another great start and took the early race lead while Sterry was battling hard inside the top 10. As the race progressed to the finish, Karro looked like he had seen off the challenge from Lenoir and would take the win and the overall, but he dropped it in a corner with only one and a half laps to go, handing the win to Lenoir and demoting himself down to 3rd.

Meanwhile, Sterry was showing maturity beyond his years as he tailed Bradshaw throughout the race eventually finishing in eighth place – enough to allow the youngster to join his team-mate on the Championship podium in third place.

Commenting after the event, newly crowned MX2 Champion Matiss Karro said: “Today I did my job and got the Championship after the second race. I was hoping to go 1-1-1 but I had a few problems in the second race, including running off the track on the first lap and then having a run in with Pocock and going down. I finished ninth and that was enough for the title. It’s great to finally win the title after six years competing in the UK.

“In the last race I started well and took the holeshot and opened a seven-second lead, but then the race was red flagged and I had to do it all again. Although I started well, I couldn’t find my rhythm and Lenoir was pushing me hard. With a couple of laps to go I made a mistake and lost the lead and had to settle for second. Now I am heading home to Latvia to race in the MXON in my home country, so I can’t wait.”

A very happy Adam Sterry added: “When you look at the results on paper they may not look great, but the main aim was to secure third in the Championship and we managed to do that. I kept a check on where Bradshaw was and did what was needed. I’m so happy to be able to get third in the British Championship to go with my third place in the Europeans to top off a good year.”

An overjoyed Team Manager, Steve Turner commented: “Today has been a great day for the team, the mechanics, all the sponsors, Matiss and Adam. It’s great to finally win our first British Championship after so many years of competing in the series and also to have two on the podium to boot.

“I’m really happy for Matiss. We’ve worked with him for three years and he could easily have won the title before if it hadn’t been for injuries. He put us through the wringer a bit in the second race, but he still got the job done. Unfortunately, his mistake in the last race meant he missed the overall on the day by just one point but we can forgive him for that.

“Adam was really nervous today, but still showed a lot of maturity keeping Bradshaw in his sights all day long and doing what was needed to secure third place in the Championship. The only real shame was that Jake (Nicholls) was not involved in the MX1 class. It would have been great to see him scrapping with Shaun Simpson on the last day of the season.”