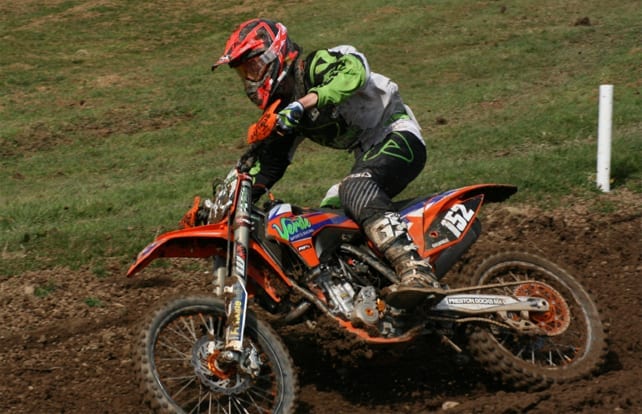 This Sunday was an excellent start for the Maxxis ACU British Motocross Championship, with the sun shining over Landrake. The track looked good and the weather couldn’t have been better. Matty Callaghan was ready to embrace his first ever ride in the Maxxis MX2.

Qualifying for Matty was smooth and consistent and finished the session with a 21st gate pick, out of the 44 strong pack. Not a bad start to the day, especially with the line up holding a handful of GP riders and seasoned MX2 riders.

Mathew got a terrible start to race one but he pushed through the pack and by the fourth lap saw himself sitting in 18th spot, with another three in his sight. With just two laps to go, he let the back end slip and lost four places. Refusing to be beat, Matty fought hard and finished an impressive 20th place, earning his first point in the Maxxis MX2 Championship.

After a slightly better start in race two, Matty set out to tackle this technical track once again, pulling back through the pack to16th place in just four laps. For the remainder of the race he continued to put in consistent lap times, which saw him gain more time on the 15th place rider. Despite several attempts to make a pass, the clock got the better of him and Mathew settled for a well-earned 16th place.

Matty got off to an awesome start in the third and final race of the day. Taking it wide, the Verde KTM rounded the first bend in fifth place, and then settled into a comfortable 11th place for the first few laps.

A mistake in the third lap saw Matty loose 10 places, but he pushed hard to regain a respectable 15th position. With just two laps to go and the track getting pretty rough, Matty had a coming together with another rider, pushing Matty back to 24th place for the close of this final race of the day.

Although Matty was disappointed, his overall 22nd position was an excellent result for this new comer to the MX2 class. Now knowing what he is capable of, Matty and Verde Sports Racing can look forward to the next round on April 7 at one of Matty’s favourite tracks, Lyng in Norfolk.

“It was an eye opener,” said Mathew Callaghan. “I now know what to expect and where I should be. I managed to score a few points and with better starts I should be able to get in the top 15.

Adrian Kirk – Team Manager commented: “Today was a good start to the British Championships. We started the day hoping for a top 20 position, then soon realised that Mathew was capable of a lot more.

“Better starts would have made life a lot easier and may have prevented the mistake he made in the last race which lost him nine places. All in all, we were extremely pleased with the weekend and we are really looking forward to seeing what Mathew can achieve at Lyng in a few weeks time.