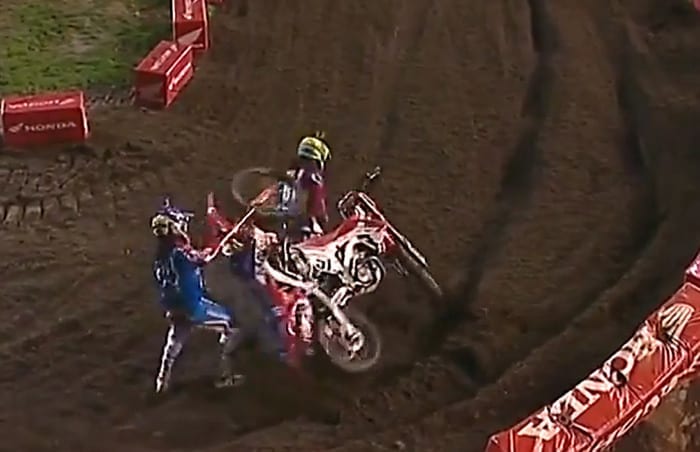 Following an incident at the 2014 Daytona supercross Main Event when Justin Barcia cut to the inside of Malcolm Stewart in a typical Bam Bam style pass, the AMA have issued a $5,000 fine to Malcolm Stewart for an AMA Supercross Rulebook violation.

On lap 20 of the Daytona supercross Main Event Team Honda Muscle Milk’s Barcia tried to pass Stewart but it didn’t really go to plan (watch the video below). There are good arguments that can be made on both sides to who was at fault. Barcia certainly doesn’t feel he’s done anything wrong – he put out a tweet saying: “100% clean pass home boy should of checked up like any normal rider would do instead of nailing the gas and making a good pass go bad.”

Stewart replied to Barcia: “No problem @justinbarcia see ya in outdoors.”

No problem @justinbarcia see ya in outdoors

You can read the full press release from the AMA below.

This is the second incident that has led to a rider being fined in the space of just a few weeks. A fine of $4,000 was imposed on Mike Alessi after he t-boned Broc Tickle during an Atlanta supercross heat race. During the commentary Jeff Emig called the incident a “cheap shot”.

Do you think the $5,000 fine on Malcolm Stewart was justified? Does it make the fine on Alessi look too low or was the Barcia/Stewart clash more serious than the Alessi/Tickle crash? Let us know your thoughts here or on our Twitter/Facebook pages.

Following a thorough review, the AMA has penalized Haines City, Fla.’s Malcolm Stewart (No. 34) for an AMA Supercross Rulebook violation that took place during the 450SX main event of the 10th round of the 2014 Monster Energy AMA Supercross, an FIM World Championship, in Daytona Beach, Fla., on March 8.

It was determined that Mr. Stewart violated Appendix A2, Section C, parts 9, 10 and 17 of the 2014 AMA Supercross Rulebook.

These sections state, in part:

9. Engaging in any unfair practice, misbehavior or action detrimental to the sport of motorcycling in general, whether or not related to a specific competition event.

10. An attack on a racing official and/or engaging in a fight. This includes any person who attacks or is involved in a fight anywhere on the premises prior to, during or after a Monster Energy AMA Supercross, an FIM World Championship meet. There will be no maximum fine or suspension period for this offense.

17. Riding on or off the track at any time in such a manner as to endanger the life or limb of other riders, officials or the public.

In light of the seriousness of these violations, and in recognition of the warning issued to Mr. Stewart for a similar violation that took place at the fourth round of the championship on Jan. 25 in Oakland, Calif., Mr. Stewart has been fined $5,000 and placed on probationary status for the remainder of the 2014 Monster Energy AMA Supercross, an FIM World Championship, season.