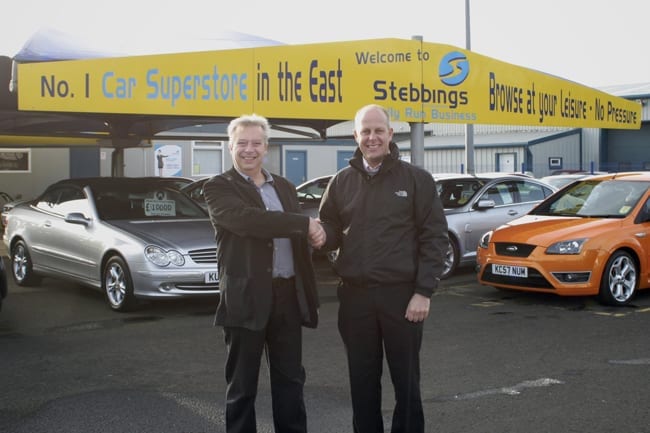 Stebbings Car Superstore of King’s Lynn have agreed to become an official sponsor of Round 3 of the Maxxis British Motocross Championship at Lyng on May 6 this year.

Anthony Skerry, director of Stebbings, has increased his company’s interest in the headline event at Cadders Hill over consecutive years and was instrumental in bringing Ben Townley to the round last year.

“At Stebbings we are always striving to be the best and we recognise a similar spirit in the organisers of the motocross at Lyng,” says Anthony. “We are pleased to be able to develop our relationship with the Norwich Vikings and the UK’s number one motocross championship and look forward to working with them to take the event to new heights.”

The Norwich Vikings have been organising motorcycle events at the Cadders Hill venue since 1936. Lyng was one of the venues for the Grandstand Television Trophy scrambles in the late 60s, it hosted a 125cc Grand Prix in 1993 and has been running British championship events for over 25 years. To stay as one of the leading venues in the UK requires commitment and planning and the club continues to invest in the facilities.

“We have to work hard to maintain the venue and we are always striving to make improvements,” say Clerk of the Course Andrew Hay. “The sponsorship from Stebbings is very important in this respect and will allow us to make further upgrades to the spectator facilities for 2012. We have enjoyed working with the team from Stebbings over the previous years and are delighted to be able build on this successful partnership.”