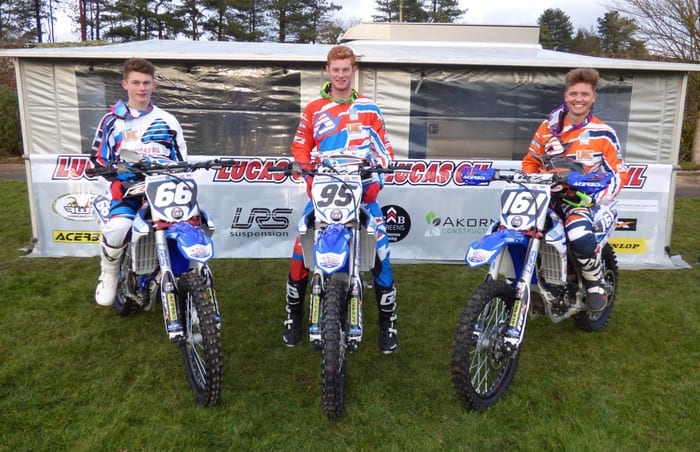 Hampshire-based Cab Screens MX announced this week that they will race on Lucas Oil in both the Maxxis British Championships and the Michelin MX Nationals this season.

In just about every motorsport discipline, Lucas Oil is a huge brand in the US and in motocross in particular, its synonymous with success. This support is being seen as a major confidence booster for the team in the run up to the 2015 season.

Team Manager, Lee Webber said to DBR: “It’s already a great result for the team and we haven’t even started racing yet. Lucas Oil brings us reliability and consistent performance. Add our riders into the mix and that breeds success. We’re hoping for some top results throughout the season.”

MX1 rider Dan Thornhill’s results last season earmark the 20 year old for top 10 finishes on the Yamaha YZ450 in both championships, while George Clarke, also 20, aims to surprise on his Yamaha YZF250 with similar success in the MX2. Josh Coleman, 17, says “he won’t settle for anything less” in the MXY2.

“If access to one of the most diverse ranges of racing oils looks set to get the Cab Screens MX team off to a great start, the workshop lubricants will help keep them in contention,” added Webber.

“Everybody knows the Cab Screen MX team has got some incredibly talented young riders,” Lucas Oil UK Managing Director Les Downey told DBR. He added: “And we’ve just added three stars of the future to Lucas Oil’s US flag. With Lucas Oil behind them at the starting gate, they are going to be a threat to every other team this season.”