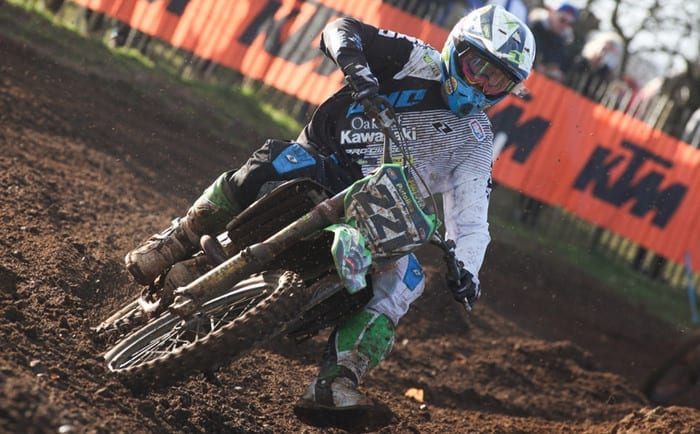 For Oakleaf Kawasaki, the shock announcement that MCF’s Red Bull Pro Nationals would not be running in 2014, meant that one of its major championships had just evaporated and a replacement had to be found.

With the inaugural MX Nationals championship oversubscribed, it was a minor miracle to get confirmation on Friday, that spaces had opened up and that the team was indeed confirmed.

For riders Shane Carless and Priit Ratsep, this meant a mad scramble to pack bags, change plans and decamp to Oxfordshire’s Culham track in time for Saturday morning’s practice and qualifying sessions. With those over by noon, Ratsep was confirmed to have the seventh gate pick, while Carless was further back in 28th.

There is a strong similarity in the race format for both championships, and so the riders found themselves on the start line in the late afternoon.

In his first race, Ratsep would complete a very consistent race at the front of the pack, earning a sixth place in the overall mixed-class scoring. On Sunday morning, with only two sighting laps under his belt, Ratsep got off to a great start again, this time in fourth.

A crash in the first lap though cost him several places, and he spent much of the race to return to the front, ending eighth. The final race, on an extremely rough track, seemed to complete the triple, but a technical issue meant that he dropped out after only three laps, ending the weekend in 28th place.

Ratsep said: “The funny thing about this weekend was that on Friday at 1pm I found out that I have to ride the next day – in England. So I had to get all my stuff together and come all the way from Belgium!

“Saturday started off pretty good, free practice was alright. I felt good on the bike, I liked the track, then in qualifying I was fourth in my group and had good lap times so I got seventh gate pick. All the starts I would say we’re really, really good.

“I was top five every start, but on Saturday the first race, I struggled also. In the beginning, I struggled with arm pump and finished sixth, but for the first day I was happy with that. The second race of the weekend on Sunday morning was not so good because we didn’t have free practice, we went straight into racing and I was not feeling good on the track. It was a lot different to the day before, got eighth at the finish which I was happy with.

“The last race was a bummer, to end the weekend like this but I had a small technical problem and I had to pull off. It wasn’t anything too serious with the bike but it was a problem that didn’t allow me to continue.”

Carless on the other hand started on the back foot from the start. Punted into the dirt on the start of the first race, he tried his best to make progress, only to crash again and then having to pull in. On Sunday, the trend continued with another first corner crash that Carless was unable to avoid. Coming from nearly last, he fought his way forward to end in the top 20. The final race once again started from dead last, yet Carless once more showed his determination and leap-frogged into the top 15 with three laps left, before having to settle for 16th. A last-lap mistake by a rival gifted him with a 15th place for a 13th overall.

He said: “It was a tough weekend for me, basically we were trying to get set up on suspension which we’ve been struggling with for the last couple of weeks. In qualifying I wasn’t feeling myself and was 14th in my class, which put me in 28th gate pick in the combined classes.

“In the first race someone hit me off the start, I had a big crash and so I had to play catchup. The track was so rough, I had a couple of crashes and I DNFed the first race. Second race I had a good jump out of the gate, in the first corner there was another big pileup and I managed to get tangled up in that, was pretty much dead last and pulled through to 19th and in the last race we altered a couple of things in the bike and I was happy with the suspension in the bike, the gearing. Had a good jump out of these gate again, someone crashed on the start and I was behind him again, so last off the start stain. Played catchup again, and managed to pull through to 15th in that race.”

Chris Talbot – Team Mechanic, said he was pleased the teams improvement over the weekend considering their late entry into the nationals. He said: “The weekend panned out not too bad actually after the late decision to ride here. We were supposed to race in the Dutch championship in Holland on Sunday, but we managed to get a late entry into the Nationals, so we changed our plans to come to Culham.

“The riders had been training in sand all week rather than the hard pack here, but qualifying didn’t go too bad and gave both good gate picks. Priit had good starts on the weekend, and he held his positions well, considering how rough the track got, but a few minutes into the third race he had some trouble with the bike, which caused him to DNF that race.

“Shane got tangled up in crashes on the starts, which didn’t help his cause. We made some changes to the bike for Sunday, and in the first race he was 19th, which was a big improvement from Saturday, and he was happy with the bike. In the third race he was a lot happier with the bike after we made some suspension adjustments and apart from the crashes, the weekend was quite good.”