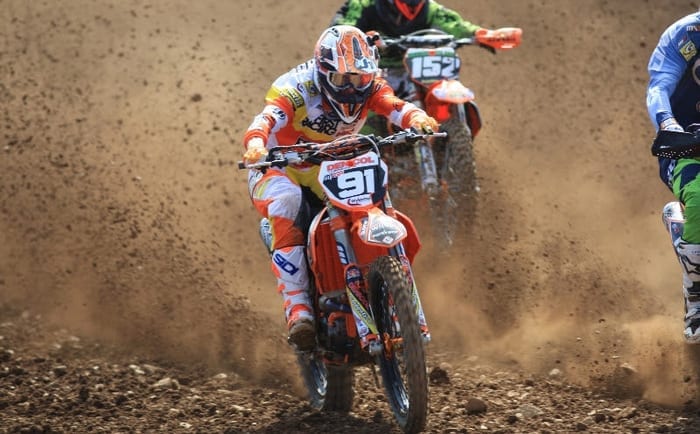 The Cornish sunshine formed the ideal backdrop as Landrake marked the scene for the opening round of the 2014 Maxxis ACU British Motocross Championship. And with the track in great condition there was a high degree of expectation that it would be a good day for the KTM team.

Morning qualifying and Superpole saw Matiss Karro and Adam Sterry head out onto the track and quickly settle into a good pace, finishing the timed session in first and sixth places respectively. In Superpole Karro improved his time by a further second to take pole with Sterry in seventh place.

In MX1 qualifying, Jake Nicholls produced a number of consistently quick lap times to finish third fastest and advance into Superpole where he improved his time by over a second to finish fourth.

The opening MX2 race of the season saw Karro fire his Wilvo Forkrent KTM bike into the lead in the first turn. From that point Karro was unstoppable as he ticked off fast lap after fast lap to open a sizeable lead over the rest of the field. Team-mate Sterry started inside the top 10 and pushed forward into eighth before a small mistake which dropped him down two places, leaving him in 10th place at the flag.

Similar to the first race, Karro took the lead in the opening corners with Sterry inside the top 10. Once out in front, Karro consistently nailed a number of fast laps which resulted in a 20-second lead over the rest of the field. He was able to then settle into his stride to take another race win.

The second race saw Sterry continually push forward fighting midfield gaining him fifth place by midway through the race. With such a tough field he continually pushed and battled home for an eighth place finish.

With two race wins already in the bag, Karro went to the line looking to make it three in a row. When the gate dropped Karro didn’t quite manage to get the holeshot and had to work hard on the opening lap to close up behind early race leaders Pocock and MacKenzie, while Sterry was just a few places behind in sixth.

Once behind MacKenzie, Karro quickly made his move into the lead and pulled away, looking like the third race win was on the cards. Unfortunately the race was to pan out slightly differently with Karro crashing and remounting in fifth place.

Karro stormed back through to second place, but as he went for an ambitious pass for the lead with only one and a half laps to go, he crashed again. After remounting in seventh place he didn’t quite have the time to improve his position.

Sterry went on to ride his best race of the day in race three, managing to focus in and close on the leaders as the race drew in and pushing eventual overall winner Pocock, right to the line to finish in a superb fourth place. Karro finished round one on equal points with Pocock, but leaving him in second overall on the last race count back rule. Sterry finished a solid seventh overall, just three points away from fourth.

A disappointed Matiss Karro commented: “I ruined the whole weekend with that last race, I was fastest all day and won the first two races and surprised myself a little with how well I was riding. After the first two races everyone was congratulating me but I was like, there is one more race to go and I need to focus on doing the same again.

“Unfortunately that wasn’t to be. I should be happy with second overall at the opening round of a long season but I wanted to win, but there is always next time.”

Adam Sterry said of the day: “Qualifying went well and then in Superpole I got seventh which was good as the start here is pretty fair. In the first race I rode tight and made a few mistakes, but then in the second I rode better at the beginning before dropping a couple of places on the last lap.

“Then the last race was definitely my best race as I got fourth and was under four seconds from the race winner at the flag. That result has now given me a lot of confidence going to the next round.”

After watching MX2 team-mate Karro take the opening race win, Nicholls stole the holeshot and stormed into the early race lead. As the race progressed Nicholls was pushed hard by reigning champion Kristian Whatley as the pair pulled away from Simpson in third. Towards the end of the race Nicholls developed a small gap and took advantage by taking the first MX1 race win of the year.

In the second MX1 race, Nicholls gated well behind Simpson but made a small mistake over the finish line table-top and ran off the track and rejoined in fifth place. The following laps saw Nicholls settle back into the race and consistently pick riders off to take third position behind Anderson. The pair battled hard for the last few laps before Nicholls was able to make a move to finish in second.

The last MX1 race saw Nicholls round the first turn in second place just behind Simpson, with Whatley in third. The three quickly pulled away from the rest of the field and battled hard for the lead.

At the halfway point Whatley moved into second and while trying to regain the position Nicholls had to settle for third place rather than take a risk and jeopardising the race result.

Nicholl’s 1-2-3 scorecard gave him second overall on the day, just three points behind Simpson as the series goes to Nicholls’ home round at Lyng, Norfolk on April 6.

Commenting on the day, Jake Nicholls said: “Coming into today I was unsure of what to expect after the tough start to the season at the first two GPs, but I got a holeshot in the first race and suddenly it all turned around.

“I felt I rode strong in the first race and dealt with the pressure well and it was mega to start the season with a race win. The second and third race also went well and I learnt a lot, Shaun got me on the start both times but I had the pace of both him and Whatley. In the last race I settled for third after making a few mistakes and I wanted to come away safe rather than crash. I’ve finished second overall today and now I can build on that as I get stronger before the next round at Lyng.”

Commenting on the strong opening round, Team Owner and Manager Steve Turner said: “We have had a fantastic start to our British Championship assault today. It’s a real shame that Matiss had a crash in the last race as it cost him the overall.

“His natural racing instinct really showed and he had the speed all day long and completely dominated proceedings until the third race. I know he is disappointed about the overall result but he will be stronger for it.

“Today was Jake’s first real chance to ride at high intensity and he didn’t disappoint taking a win as well as a second and third, it was a really good start to his campaign.

“He’s a tough cookie and battled through the first two GPs despite suffering a broken bone in his back and I know he came into this round feeling a lot better. Although still unsure of his race pace, he showed he is close to 100% again and I know he is happy to come away just three points off the lead.

“Adam also rode well at this round and got consistently stronger as the day progressed to take fourth in the last race. There was the opportunity to take fourth overall but his second race performance didn’t quite go to plan. He’s still young and continually developing, and we are supporting him in driving forward and building up his confidence to make the passes. We are looking forward to round two where we are hoping to build on the success of today.”