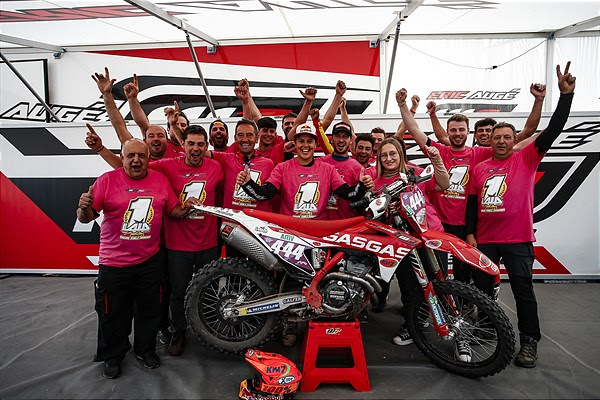 GasGas Laia Sanz has been crowned Enduro World Champion for the 2021 race season, making this her second world championship title to date.

The super talented offroad legend has dominated the two days of racing at the GP of France, taking her EC 350F to the top of the timesheets in eleven of the thirteen special tests over the weekend. In doing so she ensured another maximum points haul, and with it, her second world title of the year having already secured the TrialGP Women World Championship.

Following her double win at the GP of Sweden, Laia came into the final round of the Women’s championship with an eight-point lead in the standings. With a further 40 points up for grabs over the two days in France, the Spanish ace couldn’t take anything for granted and knew she had to perform in order to secure the title.

With conditions dry and dusty in France, Laia produced a masterclass of riding on day one, ultimately winning all but one of the tests to top the timesheets by close to a minute. Increasing her lead in the championship standings to thirteen points, she carried her speed into Sunday to again dominate and take the win by an impressive 47 seconds.

“It’s been an amazing weekend, I’m really happy,’ said Sanz. “Coming into this final round I had a small advantage at the top of the standings, so I knew that two good days should be enough to take the championship.”

“After winning yesterday, my lead going into today was even greater, so I was able relax, maybe too much on the first test. I felt good and so I pushed a little harder on the second lap. But anyway, to get the title is amazing and of course, this season I have won two, so it has been a fantastic year.”