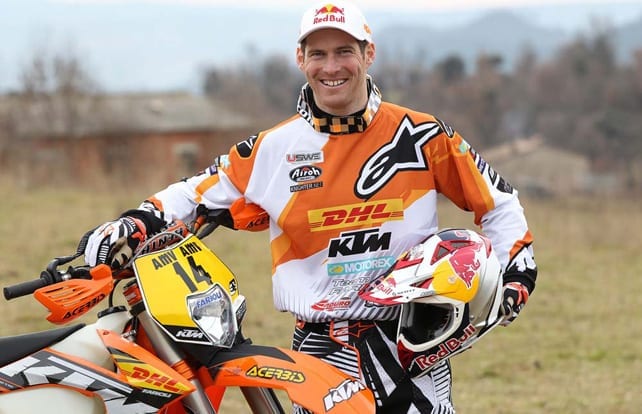 David Knight is “gutted” to announce that he will miss the 2012 ISDE. Following his crash on day one of the Enduro World Championship’s GP of Finland on September 1, Knighter has been forced to withdraw from this year’s International Six Days Enduro, where he was due to represent the Great Britain World Trophy team.

After taking advice from doctors, David, who spent one night in hospital as a precautionary measure following his fall on the enduro test in Finland, has been forced to take the difficult decision not to race.

David had further blood tests in Manchester on his arrival back in the UK. It was found that he has issues with a low red blood cell count, resulting in a lack of oxygen in his blood.

In order to identify the exact reason for the problems, more tests are scheduled for the coming days. In the meantime, David has been advised to keep away from competition until the cause of the problem is identified, and suitable treatment issued.

David Knight: “I’m absolutely gutted about this, it’s such a disappointment. Everything is ready to go for the six days and now I’m unable to compete. The ISDE is an event I love, and one in which I’ve enjoyed a great deal of success. I was really looking forward to competing in Germany with the British team, and with conditions likely to be to my liking I was focused on a really strong result. It’s going to be tough staying at home when I know I should be racing.

“But feeling like I do, and with the doctors not knowing why I have so little oxygen in my blood, there’s no option but to rest. My goal now is to work on getting fit and healthy. Once we’ve got to the bottom of the problem I hope that it will only take four or five weeks to turn things around. There’re only a few races left before the end of the season and I want to be at my best for those.”

I’m sure all Knighter’s fans wish him a speedy recovery.