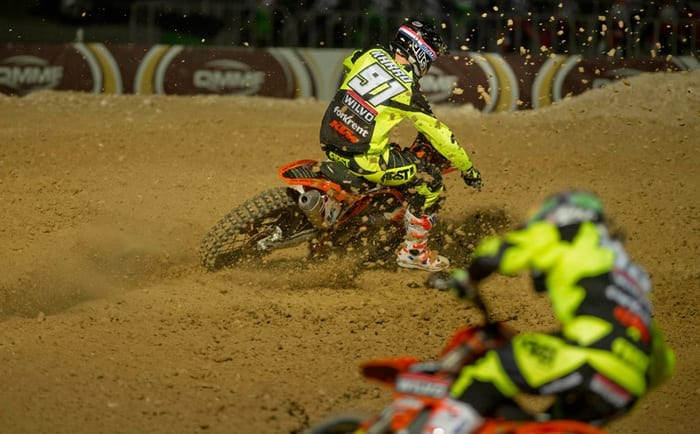 In the beautifully floodlit circuit of Losail, round one of the FIM Motocross Championship got underway in spectacular style this weekend.

After qualifying in 12th and 16th positions respectively on Friday, Matiss Karro and Jake Nicholls both struggled off the start line during race one which saw them quickly buried in 17th & 19th positions in the pack.

Karro took a little while to settle in but during lap five he started to close-in on the group in front. Just two laps later he suffered a problem with his bike which brought his race unfortunately to a premature end.

Nicholls riding conservatively due to breaking a bone in his back during testing recently, moved briefly into 15th position starting from 16th place but had to concede the place to Leok. He finished a tough first race back from injury in 16th place.

In race two, Karro fired his 350 out of the start gate to take an amazing holeshot and ran with great pace whilst being under attack from the big hitters.

After being squeezed back to ninth position Karro spent the next five laps fending off Strijbos before the Belgian unfortunately wiped him out, dropping him down to 15th which was his final finishing position.

Nicholls started off in 17th position and looked much more comfortable during his second race, putting in some good lap times on his way to another impressive 16th place finish.

Commenting on the race, Matiss Karro said: “I was surprised how I was riding in pre-quali as I was putting in some good times. My qualifying race was okay, I stayed on both wheels, with no crashes. First race I had a bad start but found my rhythm and started to come through more strongly. Then my bike had a problem and I had to stop which ended my race.

“In the second race I was really happy to take holeshot, I felt really good and strong until I was taken out. Still, I had some real positives to take away from this weekend, especially the holeshot as well as increasing my confidence knowing I can ride in the top 10.”

“I am pleased with how my first race of the year went this weekend in Qatar,” said Jake Nicholls. “Just three weeks ago I broke a bone in my back and coming into the weekend I was genuinely unsure whether I would even be able to ride the bike.

“The first couple of practises were very steady but the qualifying heat went alright and I realised that my back would in-fact hold up.

“I rode very cautiously but to come away with 10 points on a track as rough as it was is really good. It’s the hardest 10 points I’ve earned as I had to ride through a lot of pain. But I’m pleased and I feel I will be back stronger next weekend after a weeks rest. Thanks to the team and my mechanic for a great first race together.” Steve Turner – Team Owner and Manager commented: “There were a lot of positives to take out of the weekend. Jake did a fantastic job of managing his body through six gruelling sessions over the two days and came away with 10 hard-earned points.

“Matiss showed great pace all weekend and taking the holeshot on his 350 was awesome. He was unlucky to be taken out by Strijbos, which cost him a top 10 but he showed he has the pace to run amongst the top 10 riders.”

The team go into the MXGP of Thailand next week with Jake Nicholls in 15th and Matiss Karro 19th in the championship.