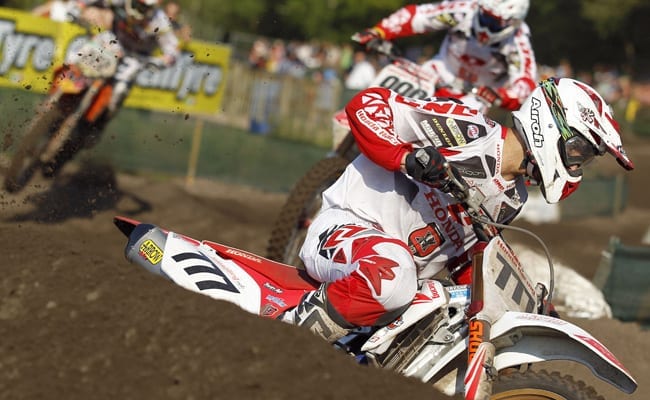 This weekend sees a return to world championship competition for the Honda World Motocross Team as they head to the USA for round three of the MX1 World Championship.

After a break of three weeks since the Grand Prix of Valkenswaard, riders Evgeny Bobryshev and Rui Gonçalves are keen to get back to business and build on the solid start to the season that has been made by both Honda CRF450R pilots. Gonçalves currently sits sixth in the world while Bobryshev is not far behind, lying eighth in the overall standings.
Gonçalves comes off an impressive top five performance in Valkenswaard while Bobryshev was bolstered by his dominant double moto victory in the national Dutch Open Championship in Varrseveld a week after his eighth position overall at the Dutch GP. However, ahead lies a very different challenge.

Awaiting them is the devilishly fast Glen Helen track, located at the bottom of Mount St Helen in California. The high-speed, hard-pack track will be a tough test for both Gonçalves and Bobryshev who usually prefer a more tight and technical arena in which to operate.

In last year’s USGP both struggled to come to terms with the track conditions and high winds which swept across the hillside venue for the entirety of the race weekend. Gonçalves finished just outside the top 10 in the overall classification and a crash for Bobryshev in the second moto put him out of contention for any meaningful points.

Both Gonçalves and Bobryshev will be looking for vast improvements on 2010 results and if the rapidly improving duo can come to terms with the speed factor and begin to utilize the impressive power of the Honda CRF450R then potential podium positions are by no means out of the question.

Rui Gonçalves
“Glen Helen is a real nice track and in a real nice country. It is always good to visit a country like the US where motocross is really big. It is also really interesting to be able to race against some of the American wild card riders. I have been training hard on hard-pack tracks during the break and have developed a really good feeling and have been working on some elements of race craft with my trainer. I think that the 450 will suit me around there. We have really good power and I think I will be able to use this to my advantage.”

Evgeny Bobryshev
“Glen Helen is a tough track, I had bad luck there last year when I crashed so I am going into this GP hoping to improve on last year’s result to start with and build from there. In many ways the track is too fast for me and it has many dangerous places which can easily catch you out but this is kinda why I like it – you can really hang it out around there! Not only the track is good but also the whole surroundings. The weather is usually very hot so I will need to factor this in to the race strategy as well.”