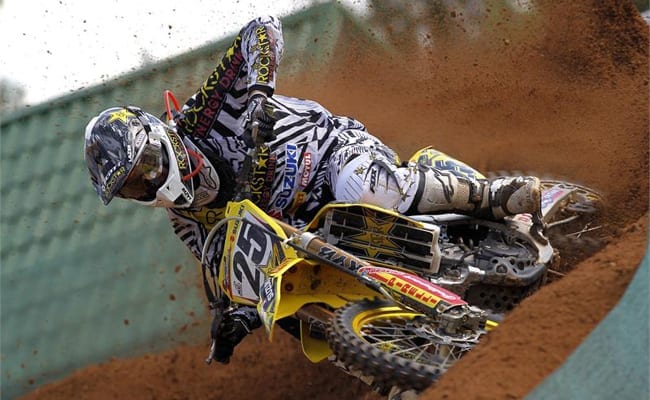 After enjoying a break following six GPs in seven weeks, Rockstar Energy Suzuki World MX1 now face one of the toughest events of the season with their home event – round 11 of 15 in the world championship – in the sand of Lommel for the GP of Limburg this weekend.

Clement Desalle – second in the MX1 standings, winner of three meetings so far and holder of six podium trophies – took a week’s break away from the factory RM-Z450 Suzuki in order to let his badly-cut left forefinger heal and also gain a bit more strength in the shoulder he dislocated last month.

“I had one week of staying away from the bike because I had to let a couple of things heal up and get better but I was still doing some training and exercise. For sure Lommel is a hard GP so I had to think about that. We are doing some riding this week in the sand to make sure we are ready for the weekend.

“It will be tough at Lommel but it will be the same for everyone. I took a podium last year but I don’t want to think about results before a race anymore. I just have to take each day as it comes.”

Lommel is renowned for its hard, physical demands even if the terrain is not the deepest to be found in the area. Lommel will be a little more under the microscope this weekend after being recently confirmed as the site of the 2012 Motocross des Nations next summer.

Steve Ramon – eighth in the MX1 class – is still searching for his first silverware of the 2011 campaign and if he manages to climb the box this weekend then it will be his first at Lommel after fifth, fourth and eighth positions in the last three years.

“I was fast but had a couple of crashes at Lommel last year so my aim will be to do better than that. Of course I know the track well and riding the sand can be tough but it is nothing out of the ordinary for me,” said the 2011 Le Touquet Beach Race winner. “We went riding three times over the last week and I’m looking forward to the weekend. I feel confident I can take my first podium of the year.”