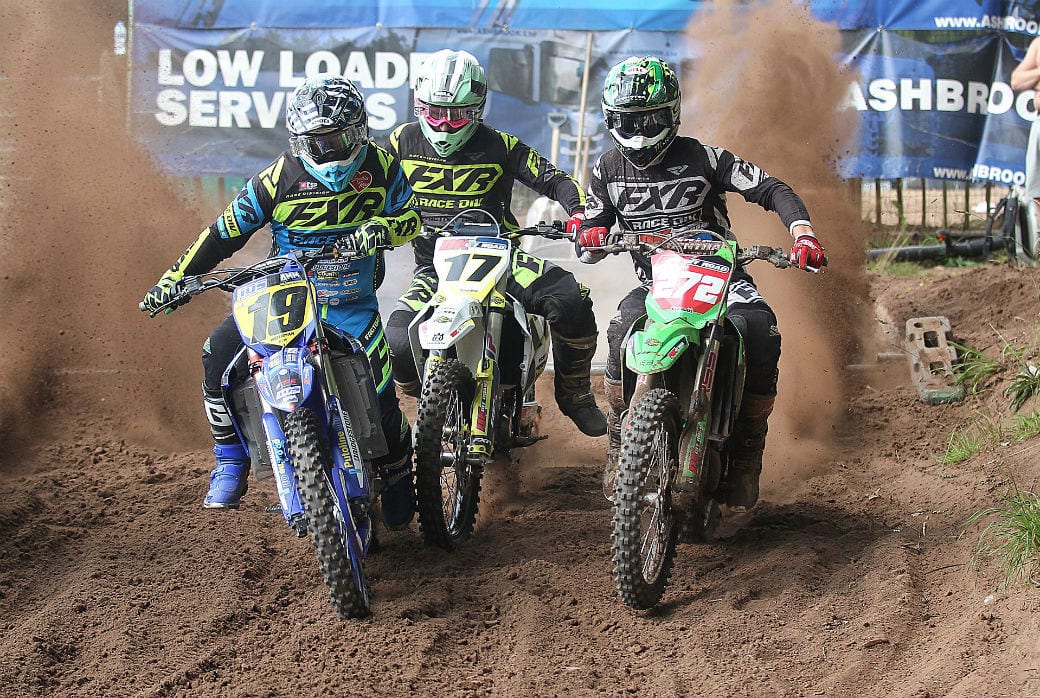 The lead at the top of the AMCA MX1 British Motocross Championship standings changed yet again after round seven at the iconic Hawkstone Park.

As an enthralling season continues to twist and turn Shane Carless is now back in control.

Going into the event, South African Neville Bradshaw headed the table but he now trails Carless by 15 points in the race for the title.

Another overall win saw Jamie Wainwright stretch his advantage at the top of the MX2 class to 53 points.

Lewis Dowdeswell blasted to a brilliant maximum score in the 125s to turn a very slender single-point championship lead into a much more comfortable 39 points gap.

Although wildcard riders completed the Hawkstone winners’ circle by taking the overalls in both the Veterans and Youth classes, respective championship leaders Jamie Powell and Matt Tolley still bagged enough points to keep their title ambitions firmly on track.

The Hawkstone action started with the hunt for the MX1 title as James Dodd grabbed the first of three holeshots.

In a typically competitive moto one encounter Dodd was replaced at the front by first Gary Gibson and then eventual winner Burton. The man who was really charging hard in this one, though, was Carless who gated ninth then crashed before storming through the pack to close right on Burton’s tail in the final stages.

Regular top end finishers Luke Meredith and Luke Mellows had a tough opener, Meredith struggling with a back injury sustained during the previous week and Mellows feeling the effects of being unceremoniously run over early on before getting up to finish ninth.

Following an almost identical pattern to moto one, Dodd and Gibson both briefly led the second MX1 clash before Burton glided through for the win.

Carless showed an abundance of power and speed in the Hawkstone sand with a classy win in the final moto from Burton – who had to work hard after gating sixth.

Delighted to get the red series leader’s plate back in his possession, Carless said: “In qualifying I set the fastest time then had a decent start in race one before going over the bars.

“I charged hard, recording the fastest lap time and recovered back to second. After another second in race two I badly wanted to win the last moto as I was feeling so good on the bike.

“We have been working so hard this season both on and off the bike as a team so it’s nice to be getting the results for everyone involved.”

There was drama well before the start of Sunday’s MX2 racing when Josh Coleman suffered a big crash in timed qualifying and suffered a dislocated shoulder.

Getting the offending bone to pop back into place, Josh refused to be defeated, not only completing all three motos but also bagging a fantastic third overall.

The opening MX2 moto was all about young Corie Southwood who led from start to finish.

Despite coming under late pressure from series leader Jamie Wainwright, who had earlier tasted the Hawkstone sand, Southwood kept his composure to hold on and record his first ever AMCA Championship moto win.

It was Wainwright all the way in MX2 moto two, with Whatley giving chase but the highlight in this one was a stunning battle for third.

After Whatley had initially grabbed the MX2 race three holeshot, it turned into another fine win for Wainwright.

Coleman got the better of Crowder in a tough battle for third which went all the way to the flag.

Southwood said: “I managed to qualify eighth which I wasn’t happy with so got my suspension tweaked for the racing.

“In moto one I gated second and quickly got into the lead. As the race progressed I was tiring and having some bad arm pump but just kept it on and I knew Wainwright was after me.

“Having lost some family members recently I have been on a bit of an emotional roller coaster and so really wanted to bag the win for them.”

The 125cc action has been thrilling all season and with two very fast wildcard riders in attendance on Sunday adding extra spice, the heat was certainly turned up a few notches.

Despite the presence of Jimmy Margetson and James Hanscomb, it was series leader Lewis Dowdeswell who took the moto one win with a faultless gate-to-flag ride.

Going into Hawkstone Dowdeswell was just a single point clear of Chris Povey but that advantage had increased following this clash.

Povey had to settle for a fifth-place finish just behind Nathan Bache.

Looking to fight back, Povey grabbed a great moto two holeshot before Hanscomb and then Dowdeswell took control. Povey was then pushed further back to fourth by Margetson.

If the opening couple of 125 motos were good, then the last one was a pure classic.

Dowdeswell, Povey, Hanscomb and Margetson were really going for it at the front before producing a dramatic finish.

On the final lap, Dowdeswell was in control but Margetson was right on his tail and looking for a way through.

Just before the Hawkstone Bridge – and with the finish in sight – they went for the same area of sand and Margetson clipped Dowdeswell’s back wheel and crashed.

Margetson, though, had enough time to remount and claim second ahead of Povey and Hanscomb.

The Vets featured a couple of wildcards in the form of ‘Factory’ Phil Mercer and multi AMCA Champion Gary Davies.

The last Vets moto saw Mercer chasing Powell and Davies but showing his vast experience gained from many years of racing on the top stage, Mercer went through the gears and picked off his rivals in style before claiming another win.

Powell was second from Davies, Lane, Smith and Chamberlain. In the title stakes, Powell now holds a 94-point lead from Lane with Chamberlain third after taking advantage as James Lane missed out due to a neck injury.

A fantastic 30 Youth class riders were in action and there was no doubting the winner as 2018 AMCA Champion Joseph Brookes returned as a wildcard entry.

And he was simply unstoppable comfortably winning all three races from gate to flag.

Following a very similar pattern to the opener, Brookes headed Tolley, Ridgway and Lewis in moto two as Reece Leverton and Jake O’Gorman also got in the mix.

In the last race though, it was all to change as while Brookes got another win, Tolley crashed four laps in and had to settle for 11th – the first time this season he has missed out on a podium.