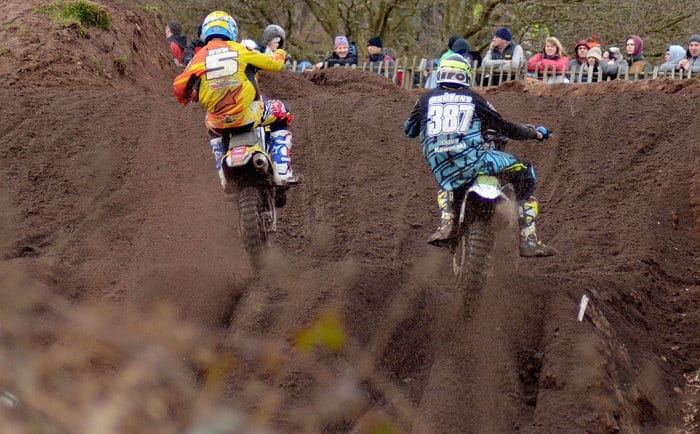 After a good few weeks away in California, Heads & All Threads Suzuki returned to England to start off its first season race at the annual Hawkstone International MX in Shropshire. The weather played along too; instead of rain, only a strong wind and dark clouds made an appearance, making it a good day out for the thronging crowds.

The first practice and qualifying session got underway at 9am sharp, and at the end of the session, MX2 riders Luke Burton and Ryo Sato found themselves in 20th and 21st place, while MX1 rider Graeme Irwin ended his subsequent qualifying session in 10th place.

For Japanese import Ryo Sato, the event was completely new; despite a crash in the first lap that set him back to the rear of the pack, he worked hard on a surface completely new to him to miss the top 20 by a few seconds. The second race was a battle for 20th again, this time however, he found himself trumped and relegated to 24th.

Class colleague Burton also had his hands full. In the first race, he found himself in a war for the top 10, and at the finish flag he was able to collect a 12th place. The second race was marred by a series of crashes that relegated him to the back of the pack, from where he faced an uphill battle to return to the points. He crossed the finish line with four points in his pocket, ending the day overall in the top 15 and qualifying for the super final. He chose to opt out of the race due to a hand injury sustained in his second race.

Despite nursing a shoulder injury picked up in California, Irwin nevertheless put in a good first race performance. After a start in the top 10, he held his own against healthier rivals, conceding places only in the last few laps to end 15th.

With the shoulder warmed up, he then went out for the second race, where he found himself in 10th for much of the race, battling with Dutch rival Herjan Brakke and collecting 10th place and a 13th overall on the day as reward for his efforts. With track conditions becoming tougher by the minute, Irwin decided to opt out of the Superfinal to rest his shoulder and give it time to heal before the opening round of the Maxxis British Motocross Championship at Landrake in three weeks.

Neil Prince – Team Manager commented: “I think it’s been good today. It’s positive from Graeme’s side, his shoulder held up good during the two races, but it was a wise decision not to go out in the last race because a lot of people had big crashes.

“Ryo had a good day; getting to the UK, riding sand, and then straight into Hawkstone, that’s a massive shock to his system really, so it was positive for him. Luke today rode exactly how we know he can ride, just get on the bike and ride it and show that he’s got the speed. For Graeme, if he was 100 percent, this would’ve been fine, for the other two this was not their best track, so roll on the less sandy tracks. We’ll see, all the riders have shown something today, so it’s positive.”

Luke Burton said after the motos: “The weekend went pretty good, at the start of the day I got a good start in the first race, just settled in really. Fitness feels good, the bike was riding good, but I chose the wrong tyre for the first race. I pulled through to 13th, then swapped the tyre out for a paddle tyre for the second race and did much better. I tangled with someone else, restarted dead last, came back to 21st before I binned it again. Started dead last again, and finished 17th in the moto despite my finger absolutely killing me.”

“Today was just a damage limitation day – it was just to check out how my shoulder is. I hurt it in the last week in California. Today is the first time that I’ve rode since then and I’m happy with how I was riding considering the circumstances,” said a philosophical Graeme Irwin.

Ryo Sato said: “Hawkstone was a difficult track, but there was a lot for me to learn. There are a lot of things to work on before the next race, I will overcome these weaknesses.”