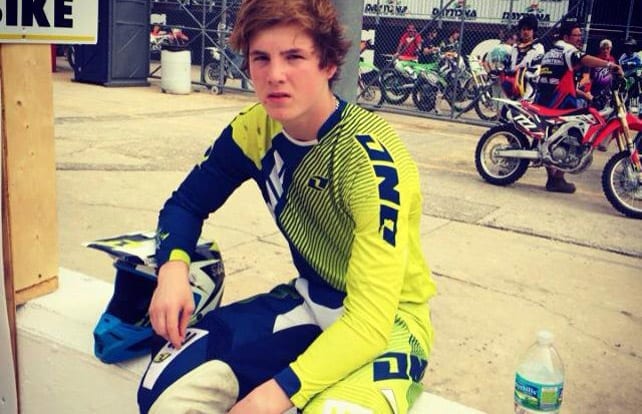 This weekend will see the return of Gradie Featherstone from the United States back to British shores.

Gradie, an Oakleaf Academy rider, has spent the last seven months training at the Millsaps Training Facility in Cairo, Georgia. And the pilot has been participating in some top American championships, amongst others the Monster Energy Ricky Carmichael Daytona Amateur Supercross earlier this year.

He has also qualified for the Regional qualifier of the prestigious Loretta Lynn’s amateur championships, where he intends to make his mark to race at the Loretta Lynn Ranch at Hurricane Mills in Tennessee in July.

Team Oakleaf Kawasaki look forward to him representing the team in the MXY2 class at the Maxxis British Motocross Championship at Canada Heights in Kent this coming weekend.

“First I’d like to thank Oakleaf Kawasaki for the ride this weekend,” said Featherstone. “I’ve been training at MTF in Georgia and it’s been a good but hard experience.

“I’ve had the chance to ride with some top pros and raced at the Daytona Amateur Supercross, where I had some good results, and also watched the Atlanta round of the supercross championship.

“The qualifiers for Loretta Lynn’s started a month ago and I got through. In a month’s time I have the Regional qualifiers and hopefully at the end of July I will race Loretta’s. I’m looking forward to coming home and race here; it will be a change with less but longer motos.

“Some might see it as a holiday, but it’s been far from that for sure, as he has been working his socks off. It is great to see him back with the team for this weekend.”