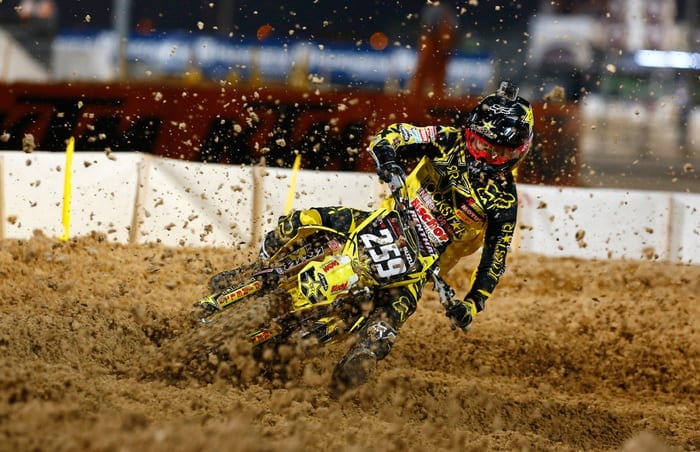 A noticeably robust Glen Coldenhoff was one of the spectators at Anaheim for round three of the AMA Supercross season last weekend and was happy to talk about some of the changes he is facing ahead of a rookie FIM MXGP Motocross World Championship campaign this year.

The soon-to-be 24 year old has been going through his paces with the works RM-Z450 (believed to be ’14 factory machinery) in California as part of his leading role for the Rockstar Energy Suzuki Europe crew.

“I didn’t expect to feel this good,” he enthused after almost three weeks of practicing with the bigger motorcycle. “I have been riding with Kevin [Strijbos] all the time so I can see where I am with the speed.”

The Dutchman is one of five star names from the MX2 class to jump into MXGP for 2015 and continues his association with Suzuki, having delivered three podium finishes and two moto wins for the brand and the RM-Z250 last year. “Suzuki have made a good bike for me and I’m still getting used to it,” the 2013 British GP winner commented.

“We started testing right after the Nations with two days in France and another two at Lommel. From there we had a good base and I have been working on that since, with just a few clicks here and there. The suspension and engine is great and the team have smoothed out the curve a little bit for me.”

Like all of Suzuki’s athletes Coldenhoff took part in a tough ‘bootcamp’ in Portugal at the tail end of 2014. Adding muscle mass and weight to cope with the extra rigours of the 450cc machine has obviously been a priority. “I’ve been eating more! I went to the dietician – something I usually do anyway – because I needed more weight. Last year I was just 67kg and that’s too light for the 450. I’m already at 70 now so it should be better.”

Coldenhoff will be keeping any eye on fellow MX2 graduates Romain Febvre, Christophe Charlier, Alex Lupino and Jose Butron in his maiden season in the premier division and is typically keeping his objectives modest for 2015: “It is always hard to come from MX2 and I think you can see that from some of the other riders who came up in the last few years. I want to be consistent, avoid injury… it is a very strong class.”

Racking up the track time and mileage in California has been part of a detailed and positive approach by Suzuki for 2015. Away from the dirt and Coldenhoff had time to digest his first taste of AMA Supercross, as well as try some laps of the Suzuki SX test track south of Corona. “We tested last week and it was hard for sure but if we were training for four months on a supercross track then we’d do better,” he said. “We also rode with MX suspension so it looked bad!”