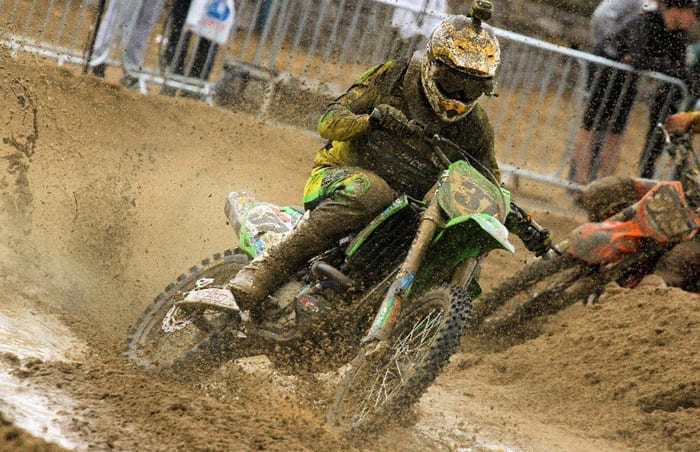 This past weekend saw the Apico LPE Kawasaki team head to the Somerset coastal town of Weston-super-Mare for the one-off Pro Nationals Festival.

The team hoped that the two day festival would produce some good results for team rider Gert Krestinov.

Heavy rain on the Friday night meant that the track was very wet and with lots of standing water so the start of the event was delayed. When the qualifying finally started, Gert managed to post a fourth fastest time in practice and then sixth fastest at the end of qualifying.

The first Pro race of the weekend saw Gert struggle with the start and have to push hard all race long to progress forward. As the race went on Gert was soon into the top five and challenging for fourth place, eventually Gert found his way into fourth place and was the third MX1 rider home.

Sunday morning saw Gert head out onto the track for the practice session and settle back into the track and prepare for the first race of Sunday’s programme. The second race of the weekend didn’t start well with Gert rounding the first turn in 11th place and quickly moved forward and into the top five. Once in the top five Gert was challenging the riders ahead and moved into third place for a podium finish.

The third and final Pro race of the weekend saw more heavy rain fall before the start of the race and left a large amount of standing water on the track. Going into the third and final race Gert was joint second on points with Kristian Whatley and only two points in front of Graeme Irwin so Gert knew that a start would be key in the tricky conditions, unfortunately Gert missed the jump and rounded the first turn in around 17th place.

With the race only being 20 minutes plus two laps instead of the usual 25 plus two laps it just wasn’t enough time to come through to the top three from that far back.

Gert knew that he had to beat Irwin to get on the podium but Irwin got away in second so it was always going to be a tall order. Gert worked his way up to fourth with three laps to go but by that time Irwin was in third with Whatley first and Watson now second.

Gert didn’t give up and kept pushing to the end and got within five seconds of Irwin but just ran out of time so had to settle for fourth in the race and ended up joint third, with Irwin getting the overall podium due to having the better last race result.

“This weekend didn’t really go to plan,” said Krestinov. “The weather made it very difficult, because it didn’t feel like a sand race it was more like a mud one. I wanted to win really badly but couldn’t make it happen. The fourth overall is not good enough for me and now two weekend’s in a row I feel like I have some unfinished business. So I want to come back to Whitby really strong.”

Steve James commented on the weekend: “It’s hard to take missing the podium on a tie break and I’m bitterly disappointed but there is no hiding from the fact that until Gert can sort his starts out it’s always going to be hard work to come through in 20 minute sprint races.

“I know if the races had been the normal 25 minutes plus two laps we would have been on the box for sure as in the first race on Saturday Gert caught Lenoir and Irwin in second and third and went over the line right on the back of them, had the race been five minutes longer I’m sure with the speed Gert was carrying he could have passed them both.

“And the same for the third and last race Gert moved up to fourth and had taken so much time out of Irwin in third and was visibly catching so again that extra five minutes would have made it interesting for sure.

“We had good speed all weekend and the race pace was strong so it’s not all bad, we have some major positives to take away with us and we enjoyed the weekend. The whole Pro National Festival event was very good and kept the huge crowds entertained with the many things they had going on as well as the racing, there are just a couple of things that could be done to improve the event for next year which I will talk to Matt about but now we have to focus on the next Maxxis round at Whitby.”