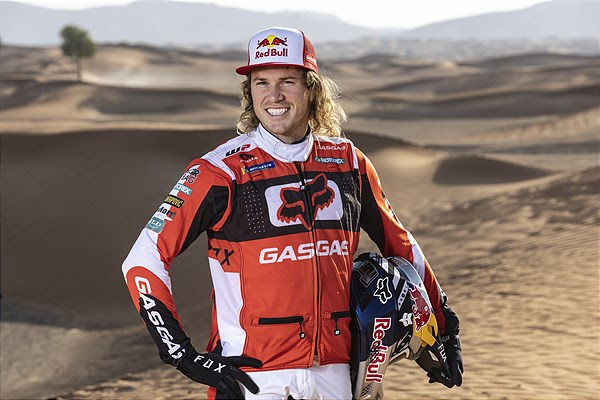 GasGas have released the latest episode of GasGas Dirt, featuring rally star Daniel Sanders to chat all things leading up to the 2022 Dakar Rally just weeks away.

Sure, he’s a super-fast desert speedster, but we wanted to know all the juicy details about how and where his dirt biking passion started, and how he ended up making it as a professional motorcycle racer. Telling it exactly as it is, Sanders’ unfiltered story is most definitely a must watch. Check it out.

Leaving home in Australia to travel the world racing dirt bikes is the dream of many young riders, and Sanders is no exception. Embracing every opportunity that’s been thrown his way, while living life to the absolute fullest, Sanders initially enjoyed an illustrious national enduro career before claiming outright victory at the ISDE in 2019.

Then, in the autumn of 2020, Chucky headed to Europe to pursue a new challenge – rally racing! It’s safe to say that he’s a fast learner, earning a stunning fourth-place finish at the 2021 Dakar Rally before securing an impressive third overall in the FIM Cross-Country Rallies World Championship. Not bad at all for a true rally rookie.

You can watch the latest episode below: