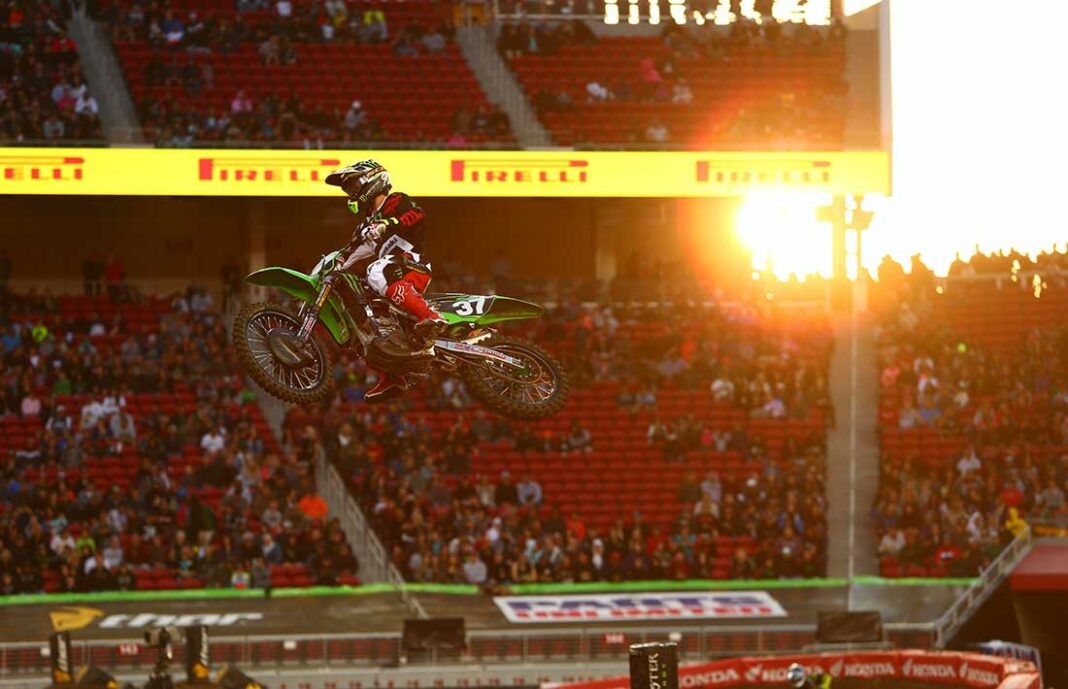 Monster Energy/Pro Circuit/Kawasaki wasted no time in getting to the lead Saturday night as the riders competing for the West Region championship returned to the track.

Joey Savatgy and team-mate Chris Alldredge came around turn one in first and second respectively for Heat Race 1. Savatgy rode smooth and consistent to a Heat Race win with Alldredge coming home in fourth.

When the gate dropped for the 250 West Championship Main Event, Savatgy rounded out Lap 1 in eighth place and quickly began his charge to the front. By Lap 5, Savatgy had moved into fifth and began battling for a podium position. Despite being held up by a couple lappers, Savatgy crossed the line in third, while team-mate Alldredge finished 14th.

Savatgy heads into the final round of the 250 West Championship in second overall and within striking distance of the points leader.

“The Main Event, all-in-all it was good,” said Savatgy. “After a rough start I tried to put in a solid 15 laps. We moved our way forward and in the middle I started to catch the two riders ahead of me and really closed the gap. Unfortunately, a couple of lappers held me up and it didn’t help my push towards the front.

“I’m leaving Santa Clara on my own two feet and scored some good championship points. Now it’s time to keep the ball rolling, keep pushing and come out swinging at Las Vegas.”

Alldredge commented: “I qualified fourth out of my Heat Race today, which I was happy with. The Main Event did not go how I wanted it to, but my crash from practice this morning left me sore.

“It was difficult to keep my normal pace with everything that happened, but I pushed as hard as I was able to. It’s not the result I wanted, but I’ll keep after it and come back strong at the next round.”