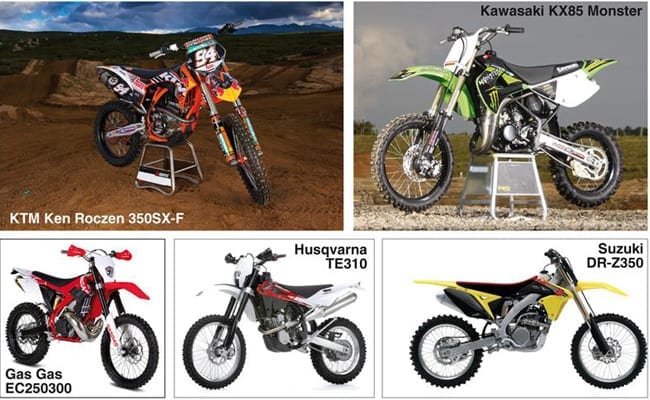 The 2011 International Dirt Bike Show will be in full swing next month with plenty to see and do for the whole dirt-biking family. As the opening day – November 3 – draws ever closer, the exhibitors face a frenetic few weeks getting everything in place and while full details are not yet to hand, visitors to this year’s off-road fest can expect to find a great mix of all-new production and race-specification machines on display with manufacturers showing their 2012 ranges.
Here’s a taster…

Gas Gas launched its 2012 EC250/300 enduro model only a few weeks ago and the big news for show-goers is that the Catalan manufacturer’s enduro bikes will land in the UK literally just before the show opens next month. Visitors to Stoneleigh can check out the ‘unseen’ machine in the flesh for the first time. Virtually everything about the bike is new with an innovative polymer sub-frame and plenty of trick bits right down to a weight saving of some two kilos over its predecessor.

Husqvarna claimed its 79th world title as Antoine Meo stormed to victory in the 2011 E2 Enduro World Championship on his Husqvarna TE310. The new 2012 Husqvarna enduro range uses the success of the Husqvarna CH Racing Monster Energy Team to produce machines that are designed for off-road riders of all abilities. The Husky enduro models, which all have a new look with new graphics, black chassis and silver wheels, will be at Stoneleigh this November. The production TE250 and TE310 4-stroke models also have a Kayaba rear shock and an uprated frame. Husqvarna engineers have worked to make the bikes even easier to ride, improving handling and engine response at low revs.

Kawasakiwill have on show its new 2012 season KX85 Limited Edition. Christened the ‘KX85 Monster Energy/Pro Circuit Limited Edition’, the new 85cc machine marries the Kawasaki KX85 – in big or small wheel form – with some tasty additions. The mini KX will have a strictly limited run and is offered with a standard specification that includes a full Pro Circuit exhaust system and seat cover plus a Monster Energy graphics kit all pre-fitted to the machine.

The Suzuki RM-Z250 looks set to be the star attraction on the Japanese manufacturer’s stand as the company makes a welcome return to the show this year. The machine will make its UK debut at Stoneleigh and visitors will be able to try it out for size while getting a detailed look at the Relentless Suzuki by TAS RM-Z250 that Mel Pocock rode to third in this year’s Maxxis British Motocross Championship and second in the Red Bull Pro National series.

The show’s organisers report that advance ticket sales are ahead of last year with its half-price entry ‘Thrifty Thursday’ proving popular. Booking in advance offers huge savings over on-the-door admission costs and tickets can be purchased from the box office on 0844 581 0735or via the ticket link at www.dirtbikeshow.co.uk right up until 9pm on Monday 31st October 2011.