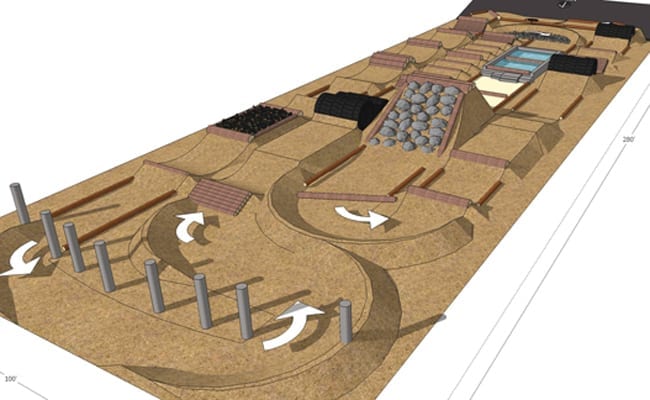 The countdown is on to the first off-road motorcycle event of ESPN’s X Games. The 2012 GEICO AMA EnduroCross Series presented by Lucas Oil will kick off on Sunday at Staples Center in downtown Los Angeles and off-road racers will find themselves on the biggest stage the sport has seen.

Eric Peronnard has been directly behind the inception and current success of EnduroCross. As an established motorcycle event promoter, Peronnard also has successes such as the US Open of Supercross under his belt. With less than two weeks remaining until the start of X Games 17 he’s a busy guy but Peronnard had time to answer a few questions on the upcoming Enduro X event.

There has been talk of EnduroCross being a part of X Games for a long time now – how many years in the making is this?
EP: “Basically the seed was put in the ground six years ago in ’05. At the second (ever) EnduroCross, I invited Tim Reed from the X Games. He was really taken by it. He said ‘Hey, this is a great sport and it would fit X Games’. But there was no open space for it at the time.”

What did it take to finally make the big show?
EP: “We started to have a working relationship at first. We exchanged a lot of ideas. I kind of kept the EnduroCross dream alive for them and just waited. It was a lot of hard work with great people for many years and finally we were at the right place at the right time. At the end of the day, EnduroCross seemed like a good fit because it’s young, exciting, it’s going up and it’s been getting a lot of traction in the motosports world.”

We’ve seen from past X Games that they like to put their own creative spin on existing events. Will there be any new crazy obstacles or anything?
EP: “No, we’re not in the business of hurting people. That’s what I always try to remind [people of]. We have a different format but that’s all that’s different. We go from three heats to two LCQs and a Main – no semi-races. That’s going to be a quicker, faster format than usual.”

So it won’t be anything too out of the ordinary…
EP: “Right. I made sure that we kept it in the championship. The wrapping might be slightly different but the essence is still the same. It’s an AMA EnduroCross championship race – and we call it ‘Enduro X’ for the weekend.”

Are the riders and teams really excited about the X Games factor or are they focused on the start of the championship?
EP: “We’ve been asking all our participants to really understand the value of this opportunity so we ask every rider to be overly professional in appearance etc. But at the end of the day this is a series so there is no difference. Riders are getting special gear made and getting bikes all pimped up and I think everybody is really getting the scope of this. But the series is the bigger picture and they all get that, too.”

As the promoter, you’ll be having a race, too – building an EnduroCross track faster than you’ve ever done before. Talk about that.
EP: “Yes, definitely it’s going to be a long, short night. We get the keys of Staples Center Saturday night at 9pm and we need to have a track ready to go 15 hours later. It usually takes us three days – we have 15 hours. So it won’t be the most challenging track we’ve ever built because we don’t have the time. We’re not going to be able to fine-tune obstacles so we’re going to make them medium. It will be spectacular but also safe. I think people will be impressed.”

A lot of viewers will be seeing EnduroCross for the first time ever. What do you think they need to know about it?
EP: “What they need to know first is that it’s very simple racing. It’s not a trial or an enduro where you have to understand the rules and scoring. The fastest guy across the line wins. I want the fans to really appreciate what those guys are doing. There will be a gazillion cameras and we’re going to be filming in 3D. I hope the 3D does it justice. Usually the TV doesn’t do it justice. The course is difficult to walk and when you see the speed those guys are going on the motorcycle, it’s quite unbelievable.”

Will there be any of the Moto X riders racing the Enduro X?
EP: “We have a women’s class and we invited the medal winners from last year. So far they’re all participating. Ashley Fiolek, Tarah Geiger and Sarah Price are all up against the best off-road girls – Maria Forsberg, Kacey Martinez and Mandi Mastin. And then the winner of Moto X will be allowed to be the wild card so there might be a seventh person. But we’ll see. You need to be ready – EnduroCross is not something you improvise!”