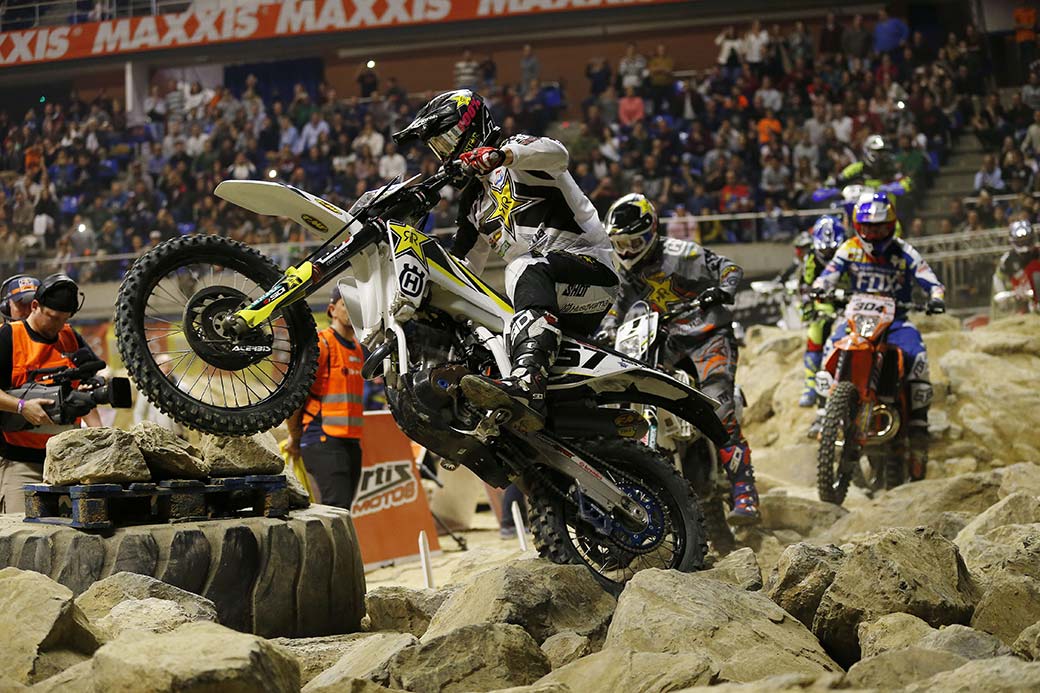 Continuing to impress during his debut season of SuperEnduro racing, Rockstar Energy Husqvarna Factory Racing’s Billy Bolt claimed his second podium result of the series with third overall in Malaga, Spain. It was a strong night for Husqvarna with teammates Alfredo Gomez and Colton Haaker placing fourth and fifth respectively.

Making a strong start to the first of the night’s three finals, Bolt held the lead during the opening laps. But a couple of small errors proved costly and he ended up dropping back to fifth. Determined to make amends, he regrouped to put in consistent performances in the remaining two outings. Placing third each time out, the Husqvarna rider did enough to secure a well-deserved top three result, while also maintaining third overall in the championship standings.

With round three of the series marking the first of two stops in Spain, countryman Gomez was eager to deliver solid results. Placing sixth and then fifth in the first two races, he put in his best ride of the night in the final race. Enjoying a clean start, he pushed the pace at the head of the field and battled hard with eventual race winner Taddy Blazusiak. In placing second he ended his night fourth overall.

Keen to build on his podium result from round two in Germany, defending world champion Colton Haaker hoped to deliver a strong showing in front of the sizeable Spanish crowd. But a night marred by costly mistakes and a first corner crash ultimately hampered his progress. Delivering his best result in race two, where he finished second, he earned fifth overall.

“It was a crazy, crazy night,” said Bolt. “I’m really pleased to finish on the podium, but I’ve never known a night like it. The track didn’t look too difficult but during all of the races there were bikes everywhere, bodies everywhere and you never knew what was going to happen next.

“I made a few mistakes, I’m a little frustrated with that, but I know that I wasn’t alone. I don’t think it was possible to not make mistakes.

“As this is my first season of SuperEnduro I’m learning all the time. My first final didn’t go so well, but the night improved after that. I had some great laps and some difficult laps but generally I managed to finish the night with some good points in the championship and importantly a podium result.”

“It was a difficult night for me. I enjoyed the track, and racing the first of the two Spanish events, but it was very difficult to find my rhythm,” Gomez said. “We’ve made some definite improvements since the start of the series, and I feel like my second-place result in tonight’s final race proves that we are making positive progress. The first two races weren’t so good. When you don’t get out of the gate well, it’s hard to move forward. In the reversed start second race I got stuck with some slower riders, who were all over the track. But that’s racing, and I’m happy with fourth overall.”

“Tonight’s been a rough night,” Haaker admitted. “Sometimes riding well just isn’t enough, and that’s how it was for me tonight.

“I got the holeshot in the first race but then stalled it and dropped a few spots. Then I went over the bars in the matrix, and managed to finish sixth. It wasn’t the start I’d hoped for. I had a great battle with a bunch of riders in the second final, with Taddy, Cody, Jonny and those guys. I dropped back to fourth when I got tangled with a lapper in the rock garden, but managed to get back to second.

“I collected bars with Cody in the first turn of the third final, which resulted in a pretty scary crash for a bunch of us. I was a lap down by the time I’d got my bike separated from Cody Webb’s and just did the best I could. I managed to un-lap myself and got a pretty decent finish. Not the night I was hoping for, but my speed was good.”

The SuperEnduro World Championship continues with round four in Bilbao, Spain on March 3.

Championship Standings (After Round 3)