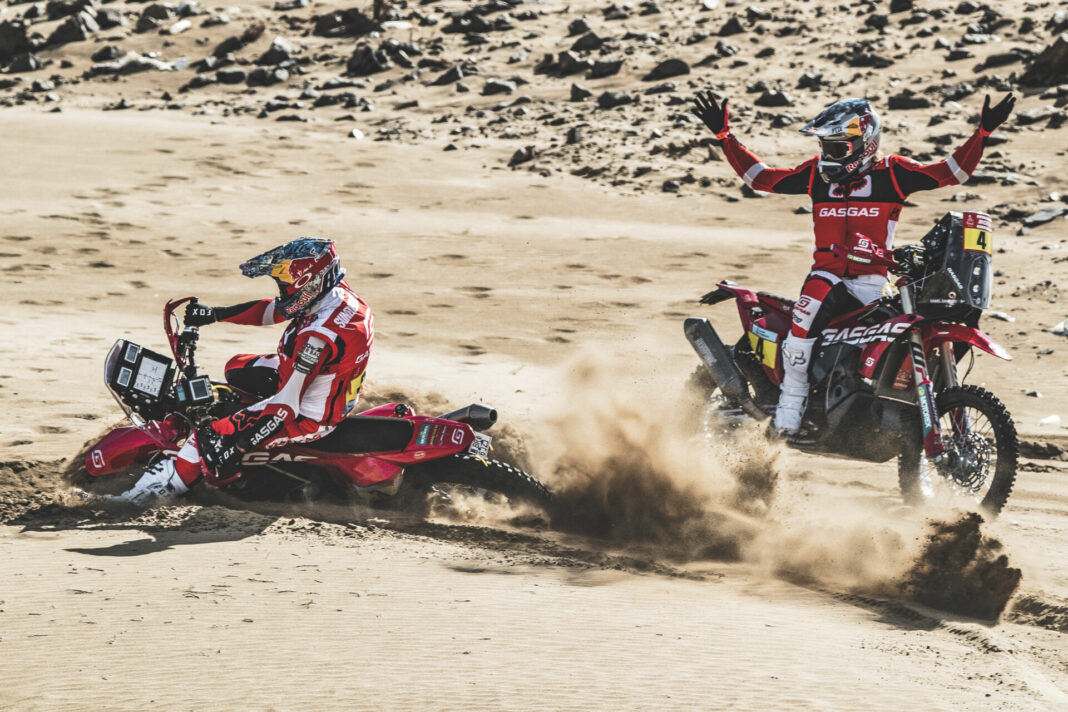 In what will be GASGAS Factory Racing’s third official participation in the Dakar Rally, it’s safe to say they are tackling this one head on with former race winner Sam Sunderland and young charger Daniel Sanders.

Racing has finally begun today with the event’s Prologue set to determine the starting order for the first proper stage, which follows the very next day.

With both Sam and Daniel enjoying a positive pre-race shakedown where they were able to break in their GASGAS RC 450F Rally bikes and dial in their set-ups ahead of today’s Prologue, both riders ended the session confident, comfortable, and excited for the challenge that lies ahead.

Knowing to expect the unexpected at the Dakar, the 2022 edition will mark Sam Sunderland’s ninth start at the prestigious annual event. A previous race winner in 2018, the Brit has an abundance of experience and certainly possesses the skills needed to challenge for a place on the overall podium.

Delivering a highly impressive fourth-place result at the Dakar just under one year ago, the ever-confident Daniel Sanders returns to the race following a solid season competing in the FIM Cross-Country Rallies World Championship in 2021. With the Aussie ultimately claiming a bronze medal in the FIM series, and now armed with even more experience, he has a serious shot of success at the 2022 Dakar.

Sam and Daniel are now making their final preparations ahead of the short, 19 kilometer Prologue, which is quickly followed by six grueling stages. A mid race rest day then follows before they take on another six demanding days of competition, each taking them one step closer to the finish line in Jeddah on January fourteenth.

Sam Sunderland:“We’re just one day away from the Prologue and the start of the Dakar so it’s a pretty exciting time! We had a really positive shakedown a couple of days ago, so we’re all set to get things started. The Dakar always throws up some surprises, so it’ll be important to stay focused, keep looking forwards, and stay calm. For sure I’m aiming for a strong result and I think it’s certainly possible to get on the overall podium once again.”

Daniel Sanders: “The shakedown went really well and it was a good chance to run the bike in, set it up for the race, and make sure everything is spot on for the start. It was good to loosen up the body on the bike a little bit too and shake out the nerves before the serious stuff starts. I felt great on the bike, everything was perfect, and I really can’t wait to get this race underway.”