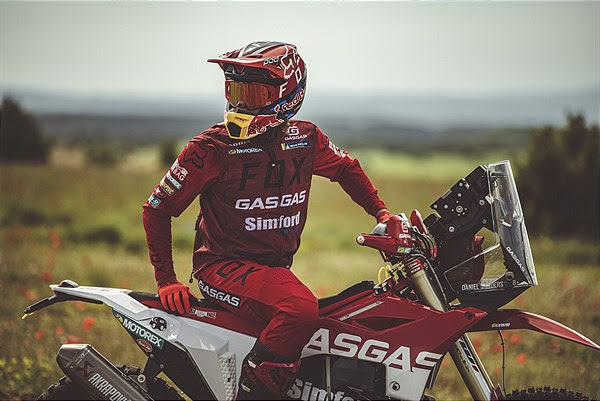 GasGas rider Daniel Sanders is fit and raring to go as the 2021 FIM Cross-Country Rallies World Championship heads to Morocco for the Rallye du Maroc.

Marking the penultimate round of this year’s FIM Cross-Country Rallies World Championship, the Rallye du Maroc is traditionally one of the last proper tests for teams and riders ahead of the Dakar Rally, held in January. Never having even visited the country before, let alone raced there, Daniel is looking forward to getting back to competition, especially at a desert location like Morocco.

Following his excellent fourth place finish at the Silk Way Rally, a performance that earned him three stage wins from five stages Sanders travelled to the United States where he spent the downtime working on his speed and bike fitness.

With the team joining him stateside in September, an intense month of road book training and work on bike setup then followed. Now, feeling fast and comfortable on his GASGAS RC 450F, Chucky is excited to get back to racing.

Totaling six days, the Rallye du Maroc will ease riders into things with a short Prologue stage on Friday, October 8. The short ten km sprint will decide the start order for Saturday’s 441 km stage one, that in turn will be followed by a further four stages, all set out in loops from the main bivouac in Zagora.

When riders reach the finish on Wednesday, October 13, they will have covered a total of 2,656 km, and raced 1,633 km against the clock. The mixture of fast tracks and dunes should suit Daniel’s skills perfectly, and the young Aussie is definitely keen to get started..

“It feels like it’s been a really long time since the last race, and with Silk Way not going the full distance due to the pandemic situation, that was a bit of a strange one too,’ said Sanders.

“Even though it was shortened, I had a good time in Russia, it was great to get some stage wins and it showed I definitely have the speed to mix it up front. After that, I flew to America and have been doing a lot of motocross training to maintain my fitness on the bike and keep that intensity you need.”

“After the team arrived in the States, we did a lot of testing over there, plenty of road book training and working to improve the bike. I’m really looking forward to Morocco now, it’s a bit crazy not having so many races, but I’m definitely up for this next one. Hopefully the race should suit me, I’ve never been there before, but I hear it’s always a good race, with a good variety of terrain. I can’t wait to get started.”