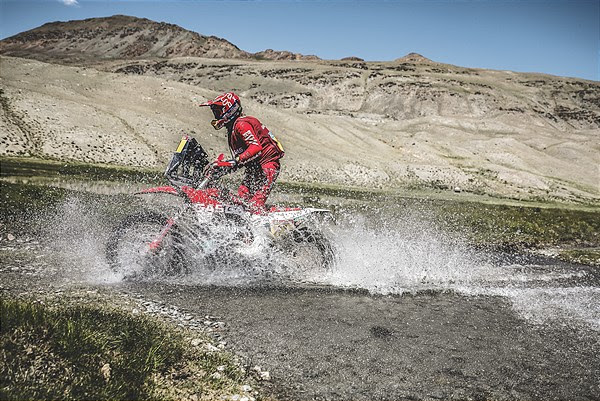 GASGAS Factory Racing’s Daniel Sanders has claimed another impressive stage win at the Silk Way Rally following a cool and calculated ride on day four of the event.

With the penultimate stage, and the punishing marathon stages, now successfully completed, Sanders has advanced to fourth in the overall provisional classification with just one day of racing to go.

Riding with confidence aboard his GASGAS RC 450F, after taking his second stage win of the event Daniel will now lead out on the final stage with the aim of completing the rally on a positive note.

The final day of racing at the revised Silk Way Rally takes place today as the fifth special of the event will be a re-run of stage two where Daniel claimed his maiden FIM Cross-Country Rallies World Championship stage win just a few days ago.

“With today’s stage being the same as yesterday there was definitely less focus on navigation, but the same dangers remained so that was the main thing to concentrate on today,” explained Sanders.

“Some of the river crossings seemed to be a little deeper today so it wasn’t plain sailing. Again, I felt good on the bike, it’s worked great since the start so it’s good to know we have a good set-up and I can just focus on my riding. The scenery was pretty epic on this stage, so I really enjoyed that part of it and with one day to go, we’re in good shape. I’m looking forward to tomorrow.”