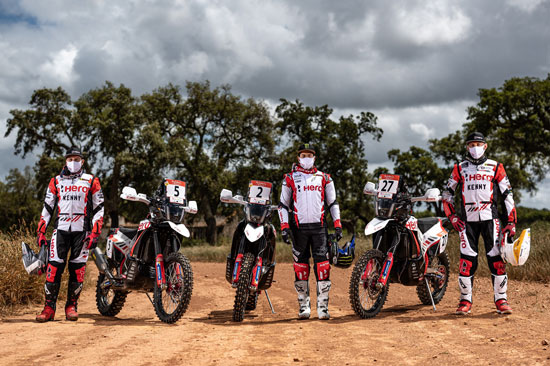 Hero Motorsports rally team is gearing up for Dakar rally 2022 success with new recruit Franco Caimi, alongside team mates Joaquim Rodrigues and Sebastian Buhler starting off with the Andalucia rally.

The Argentine Franco Ciami has joined forces the with Hero Motorsport team rally last month, and will be making his team debut at Andalucia this week. Being an experienced talent in the rally raid circuit, this should help bring up the teams overall performance across the season.

Joaquim will also be looking to build on his performance and results with the team at the Dakar, as well as his team mate Sebastian as he will be looking to get some more laps and experience under his belt.

Stationed at Villamartin in Spain, the Andalucia Rally will be kicking off on May 12, with a short prologue stage, then followed by four days of racing covering a huge total of 1629KM which will include 1244KM of special stages.

“We are very excited to kick-off our new season with the Andalucia Rally and looking forward to a great race and the season ahead,” said Wolfgang Fischer, Team Manager.

“We have utilized our time to work on our bike and also strengthen the team keeping the future in sight, We are excited to see Franco Caimi in our team and wish him the best for his first race with us. We are very excited about our prospects and possibilities this season.”