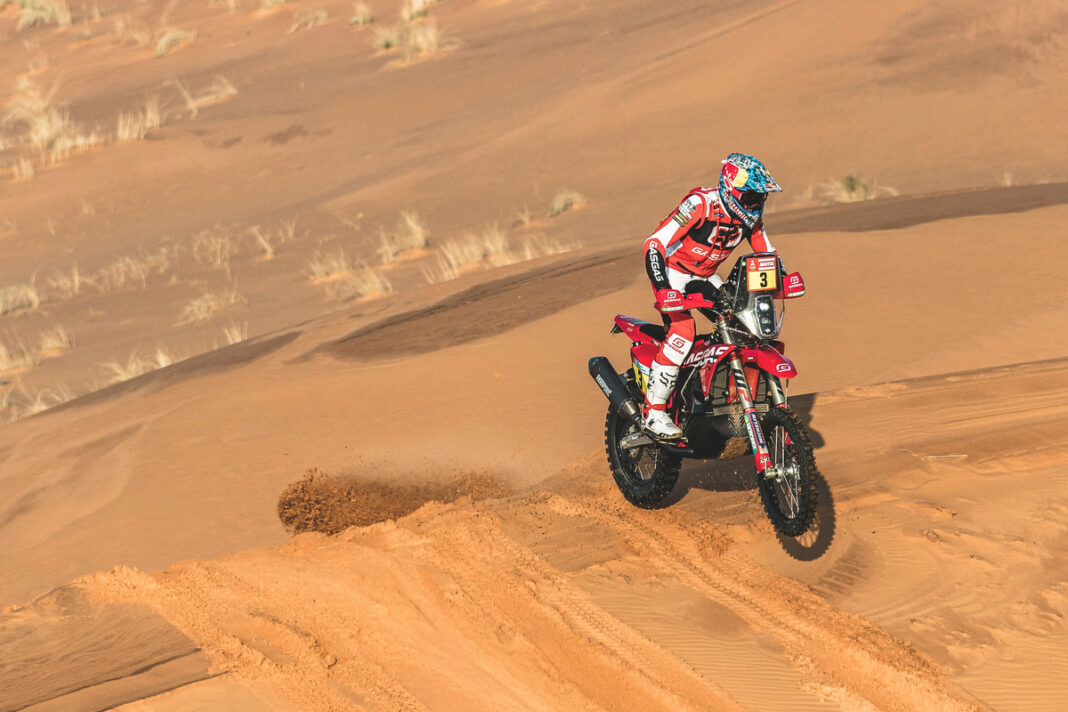 Ticking off another solid day of racing at the 2022 Dakar Rally, GASGAS Factory Racing’s Sam Sunderland and Daniel Sanders have both safely completed the relatively simple, but super-fast, third stage.

For Sunderland, the Brit expertly assisted with opening the special after setting off in second place before a minor issue finding a waypoint caused him to lose a little bit of time. With all riders setting a similar pace, he ultimately placed 17th, just seven-and-a-half minutes behind the stage winner to retain the overall rally lead. Sanders meanwhile secured the fifth fastest time and now lies fifth in the overall provisional classification.

“Today was very sandy, and very fast!’ said Sunderland. “I had a little bit of difficulty finding a waypoint, which allowed a few riders to catch up with me, so I knew I’d lost a bit of time there. But overall, it wasn’t too bad. We’re in for a really long stage tomorrow so starting further back is a good thing and I’m excited for a long day on the bike.”

As the 23rd rider to enter stage three after his little detour yesterday, Daniel Sanders was on the gas from the moment he entered the special until he roared across the finish line in Al Qaisumah. Despite being slightly frustrated that the stage was cut short due to heavy rain, the Aussie remains upbeat and near the front of the provisional standings. Sanders is now just under nine minutes behind the race leader, Sam Sunderland.

“It was a good day today.’ said Sanders. “It’s a shame that the stage was cut short as I had a solid pace going and feel like I’d have made up some more time on the guys in front. The navigation was a little bit easier that previous days, so I was able to put my head down and charge all day pretty much. I enjoyed it and I’m looking forward to tomorrow.”