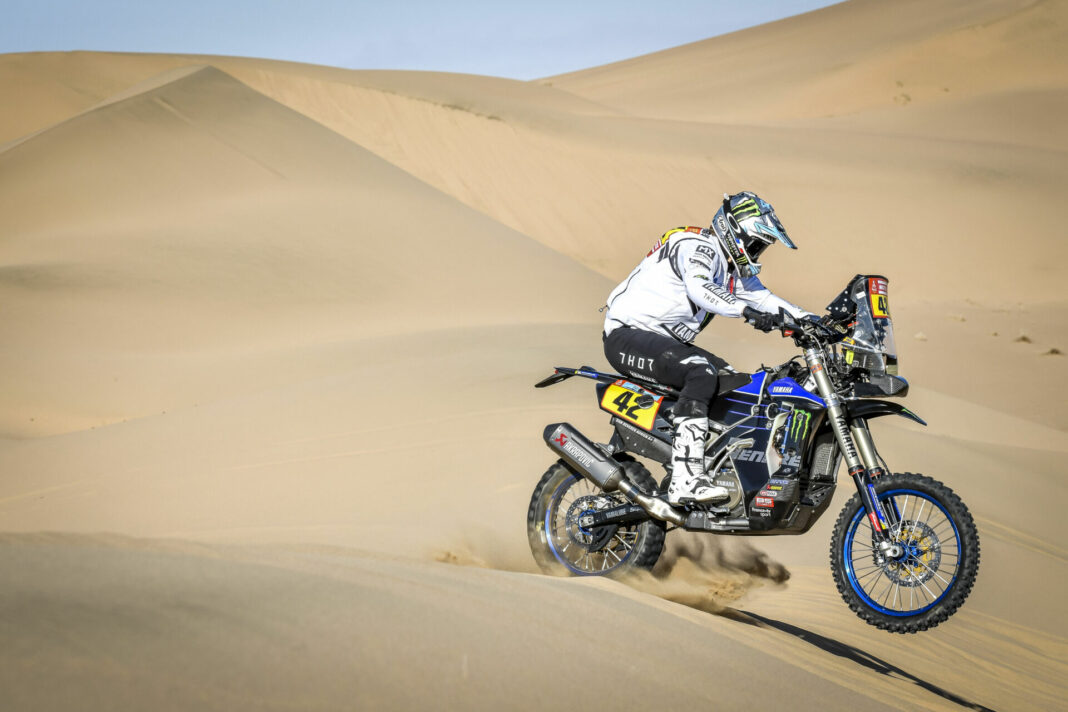 Offering a serious test of their strength and focus, the longest stage of the Dakar has been successfully completed by all three Monster Energy Yamaha Rally Team riders with each posting a positive result.

The first rider to safely finish the 465-kilometre stage four was Adrien Van Beveren in eleventh with Andrew Short thirteenth, while Ross Branch finished right behind his teammates in fourteenth place.

After racing for well over four hours through stage four at the 2022 Dakar Rally, Adrien Van Beveren brought his Yamaha WR450F Rally home in a strong eleventh place. Despite the relatively straightforward high-speed special offering little to separate the leading riders, the Frenchman maintained his solid pace throughout all 465 kilometres to secure another positive result on the longest scheduled stage of the rally. Van Beveren now lies in third place overall, just under five minutes adrift of the overall leader heading into stage five.

Following his unfortunate navigational error on stage one, which affected many of the event’s top competitors, Andrew Short has since delivered impressive results. Stage four was no different for the American who, after a calculated day of racing, secured the 13th fastest time and now advances three spots in the provisional classification to 13th.

Ross Branch maintains his eleventh place ranking in the provisional standings after the conclusion of stage four. Incredibly, the 35-year-old recorded the very same time as his teammate Andrew Short and will be the fourteenth rider to take on tomorrow’s 348-kilometre stage five special. With a very favourable starting position and rolling sand dunes forming the final 80 kilometres of the special, Branch is hopeful of delivering his breakout stage result of the rally so far.

“Another fast stage today and not so much in the way of navigation. It wasn’t my favourite stage, but I’m happy to have completed the longest stage of the rally. I pushed on throughout with a strong rhythm and it’s great to be in such a good position after four stages. I’m super happy with my overall performance so far and the goal is to continue like this, keep focused, and take things day by day.”

“Today was a good day. Starting up front and knowing it was the longest stage, it was going to be tough. It actually turned out pretty decent though. Brabec caught me and then we navigated together for almost the whole stage, which actually worked out really well as overall I didn’t lose too much time. I feel like I managed the day really well and I’m happy with things so far. Obviously, it’s a real shame about day one, that really set me back, but if I can keep on riding like I did today then we can for sure move up the leaderboard as the rally continues.”

“It’s nice to have completed stage four, the longest one of the race, safely and tick off another completed stage. Despite it being a long one, there wasn’t much to separate us riders as the navigation was somewhat straightforward and the terrain wasn’t too technical. Tomorrow though looks like it will be a lot slower early on and then end with a big section of sand dunes so I’m excited to get that one started.”