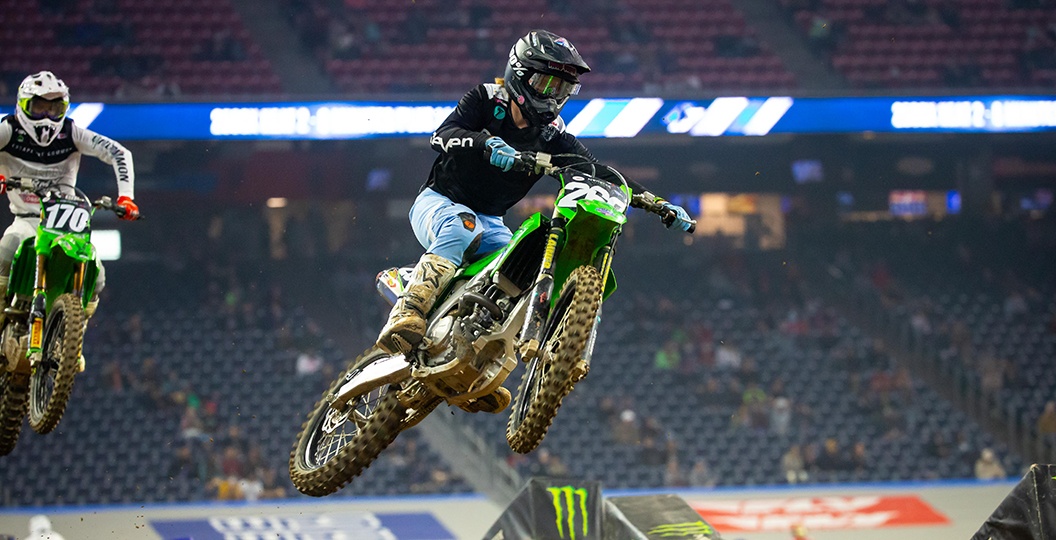 British favourite Dylan Woodcock has been making steady progress since his back injury at the Monster Energy Supercross a few weeks ago. Speaking to DBR, he chats through the start of his season and what’s to come…

DBR: Dylan you had a great start to the supercross season, how did that feel with the UK backing you going into round one?

“Yeah I mean it was great because there wasn’t any racing going on at home, So it was good for publicity for me and the sponsors that I have so it was great for them. I didn’t feel like there was a lot of pressure or anything like that because I was doing it off my own back, so I was having a lot of fun and I think that’s why I was riding so good and I had good results.”

DBR: What’s it like being back with the CMH team and on the Kawasaki? You have seemed to gel with the bike well.

“It was good to be back with Micky, he knows a lot of people in the industry and helps me generate a lot of sponsors, so that’s been cool. I’m back on a Kawasaki which I like, so that was really good and I felt really comfortable on that. I love that bike as I tested it before I went so fingers crossed I will get one here in the Uk, as I don’t have any bikes at the moment, so maybe when I start riding again in the summer it will be one of those.”

DBR: So let’s talk about the bad side of racing, Injuries. How is your recovery going after your crash a few weeks ago?

“With the swelling in my back at the moment it’s difficult to move around as I don’t want to do any further damage, so it’s a bit difficult to do any treatment. I’ve got to wait at least five weeks before I can get anything done, but once I’ve finished my 10 days quarantining at home I will at least be able to get outside for a walk, kind of get around and move for a little bit so I’m excited about that.”

DBR: Is there any plans for you to do any UK racing this year?

“I have some fun video shoots lined up, but nothing racing wise. I’m hoping to go to France and maybe Germany to do some races, but the UK I’m not sure, then I will probably do the Supercross at the end of the year.”

DBR: Looking towards the future, what’s the goal?

“Well I’d really love to do the French Supercross and obviously the American Supercross, but maybe in Britain I might be able to get a fill in ride somewhere for a couple of races, but the main goal for me at the moment is to get right and get back to work earn some money and have fun.”