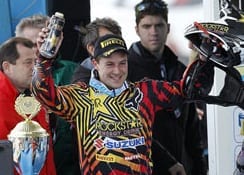 The FIM World Motocross Championships got kickstarted into life in Bulgaria yesterday.

Steve Frossard headed the pack out of the opening MX1 moto and showed every intention of clearing off but Clement Desalle came back from an average start to run through the chasing pack and challenge the Frenchman. It would never quite happen, however, as Frossard responded to the threat and Desalle ran off track on the final lap to allow Frossard to celebrate in style ahead of Desalle, Nagl, Philippaerts and Guarneri. Reigning champion Antonio Cairoli had an untypically lackadaisical start to the season in seventh.

Rui Goncalves holeshot the second moto but Desalle was right there and soon into the lead. Frossard gated less well but was very quickly through the pack and onto the MX Panda’s tail, the pair of them battling for the lead ahead of Tanel Leok before Desalle made a mistake and gifted the Frenchman the lead. As Frossard strove to consolidate his position Jonathan Barragan came charging through displacing Leok and Desalle and showing signs of eating into Frossard’s lead. Frossard, maybe feeling the pressure, briefly dropped his Yamaha and Barragan and Desalle were immediately right on him, Barragan taking the lead before Desalle came bursting through. Frossard followed him into second as the pair rejoined their earlier battle with the win going to Desalle, the pair tied on points but Desalle getting the nod for the overall by virtue of his better second moto. Barragan took third ahead of Evgeny Bobryshev and Goncalves.

In contrast, the MX2 class was, unusually, far more of a whitewash. Ken Roczen came back from his American sojourn in rip-snorting mood and just rode everyone else off the track, winning both motos going away ahead of Tommy Searle. The Brit is in top form on his return to the GP scene, taking a brace of seconds and seemingly comfortably ahead of the rest of the pack – if he can raise his game just a bit to challenge Roczen we should be in for a belting season.

The good news is that even if the leading duo decline to put on a good race there’s plenty going on behind – Jeff Herlings, Gautier Paulin, Zach Osborne, Arnaud Tonus and Jeremy Van Horebeek are all in the mix with Max Anstie looking to get involved too.

Stateside now and the SX circus went to St Louis this week. After a fairly extraordinary month (even by his standards), James Stewart came out and just plain beat everyone straight up to take his first win since February. The Yamaha star gated well and was soon by the holeshotting Ivan Tedesco for the lead but Ryan Dungey was right there and quickly into second. There was nothing, however, that he could do about Stewart although it has to be said that he didn’t allow Stewart to just check out. Ryan Villopoto and Chad Reed gated less well and battled early on before Australian Reed had a mishap that allowed Villopoto through, the pair of them moving through to take third and fourth as Trey Canard – the fifth part of the championship jigsaw puzzle – recovered from a terrible start to close in on fourth placed Reed at the end.

It means that the two Ryans at the head of the table are now separated by just five points – Villopoto ahead of Dungey – with Reed eight points off the championship lead, Stewart eight points off Reed and Canard just four points in arrears to Stewart. This one, as the saying would have it, is going to go to the wire.

In the East Coast 250F class they’re almost at the wire. Blake Baggett took the holeshot but series leader Justin Barcia was swiftly through into the lead followed by Ryan Sipes. Sipes immediately launched an assault on Barcia, even making an attempt on the lead but Barcia was straight back at him, taking the place straight back. Sipes was looking to launch another offensive when a mistake dropped him back and into Baggett’s sights so Sipes went defensive to keep second while Barcia motored away up front. Sipes would eventually pull away to clinch second ahead of Baggett and Dean Wilson. Wilson’s quiet night means that he goes into the final round 20 points in arrears of Barcia who has a hand firmly on the title.