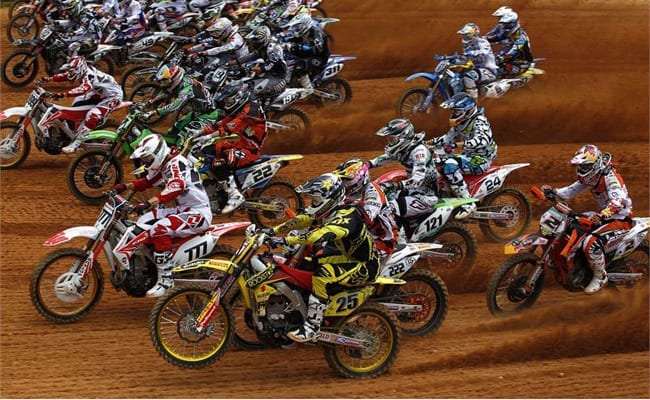 Clement Desalle and Jeffrey Herlings claim victory at the sixth round of the FIM Motocross World Championship in Portugal. Desalle’s win means he keeps the red series leader’s plate while Herlings leapfrogs team-mate Ken Roczen to the front of the MX2 standings after the German DNFs race two.

Honda World Motocross’ Bobryshev achieves his second podium of the season thanks to his two fourth positions. The Russian takes the Lovemytime holeshot award in the first heat.

His team-mate Rui Gonçalves finishes seventh in the first heat but he succeeds in being third in the second one and he ends with a solid overall fourth position in his home GP. Gonçalves takes the holeshot in the second race.

Monster Energy Yamaha’s Frossard finishes third first time out but things did not start well for the French rider in the second one and he has to fight his way through from 18th up to seventh. He sits third in the series, 36 points behind Desalle.

Red Bull Teka KTM Factory Racing MX2’s Herlings obtains his third overall victory of the season and he also becomes the new red plate holder in the MX2 championship. Herlings is not able to win any of the races but his consistency hands him the overall win.

Monster Energy Yamaha’s Paulin is on the second step of the podium and he is still fifth in the championship but just two points behind fourth-placed Osborne.

The third overall goes to Bike-it Cosworth Wild Wolf Yamaha’s Osborne who finishes tight in points with Paulin. Osborne’s suffering from chest pains but the American digs deep to get on the podium.

CLS Monster Energy Kawasaki Pro Circuit’s Max Anstie battles for a podium in the opening moto but ends up fourth. Seventh second time out, Max takes fourth overall and holds sixth in the standings. Completing the top five is Arnaud Tonus from Bike-it Cosworth Wild Wolf Yamaha thanks to his 11-4 result.

Tommy Searle wins the second race but after getting trackside fencing caught in his rear wheel in the first heat while battling with Anstie he’s forced to DNF. Roczen wins the first MX2 heat but he crashes hard at the beginning of the second race and cannot continue.