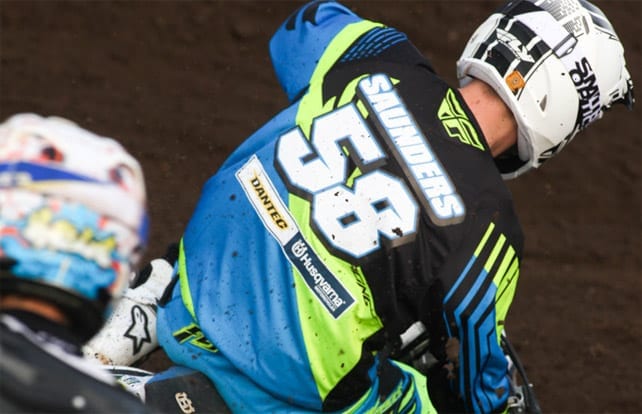 Dantec Husqvarna got its youth racing season off to a good start this past weekend by sending youth rider Tony Saunders to the first round of the GT Cup at Mildenhall in Suffolk.

With the weather already looking good and forecasts predicting an improvement over the weekend, qualifying got under way bright and early. And Saunders made his mark by qualifying third.

The first of four races went to the line just before noon and here Saunders found himself on the ground early on whilst challenging the leader for his position.

Restarting in 10th, he worked his way back to fifth at the chequered flag. The next race, late in the afternoon, was a big improvement. Here Saunders took the lead early and fought off a challenge by Kyle Lane, taking the win by several seconds.

On Sunday morning, the third race of the weekend got under way after a quick sighting lap around the track. Here Saunders found himself in competition with Henry Siddiqui throughout; some arm pump however meant that he had to make do with second place. The final race in the afternoon saw Saunders far ahead up front with Lane and Siddiqui. With the track rough and rutted, he ended third with a second place overall on the weekend.

“The weekend went all right; I struggled in the first race on Saturday, I came off and came back from tenth to fifth. The second one I won, said the Youth Lites pilot, Tony Saunders. “On Sunday, I got a bit of arm pump in the first race and ended second, and ended third in the last one. It was a good weekend with a second overall.”

Matt Hutchins, Dantec Husqvarna UK Team Manager commented: “I am really pleased that Tony has produced an impressive overall podium finish and first moto win for Husqvarna and the team at the GT Cup.

“He has been plagued by a shoulder injury in recent months but has put it behind him and pulled off a great result.”