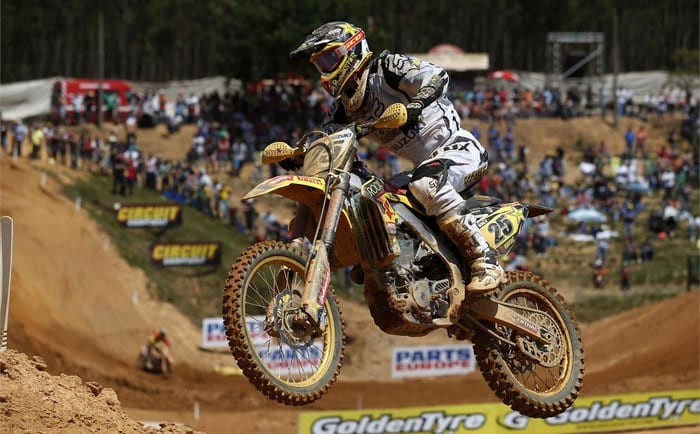 Rockstar Energy Suzuki’s Clement Desalle was one of the three fastest riders in the premier MX1 class of the FIM Motocross World Championship at a hot and sunny Grand Prix of Portugal.

The Belgian finished third overall at Agueda for the sixth round of 17 in the series, in front of 15,000 spectators, after battling with Gautier Paulin and Antonio Cairoli in both motos on his factory RM-Z450. Desalle survived a heavy second moto crash while trying to pass Paulin for second place to be able to spray champagne for the fourth time in 2013.

Agueda was a brutal mix of speed, bumps, ruts and forced concentration. The physical and mental demands throughout the two 35-minute and two-lap motos meant it was one of the hardest tracks of the series so far.

Desalle came into the weekend as one of the favourites for victory thanks to success in the previous three visits to Agueda. Signs were positive on Saturday as he secured his first pole position of the season, but the terrain was heavily watered through Saturday evening and it meant a deeper and rougher course for Sunday where a single, quick racing line was prevalent.

Desalle had two good starts and together with Paulin and Cairoli set a frantic pace at the front. The 23 year old was frustrated in the first moto with an inability to overtake and a lack of comfort across the Portuguese dirt. He was able to finish second after Cairoli crashed in the closing stages.

In the second affair he trailed Paulin for practically the entire distance as Cairoli led. A valiant attack on the penultimate lap cost him when a longer landing from the table-top nearest the crowd threw him into the braking bumps and pitched him off the saddle. Nursing pain in his back and neck Desalle was able to retrieve the bike and motored around the final lap-and-a-half to take fifth.

Team-mate Kevin Strijbos had a weekend to forget. The Belgian was not able to find a groove with the devilish hard-pack and the combination of mediocre starts and heavy arm-pump problems in the first moto eroded his capabilities for a top-five result. The Belgian struggled to 10th in the initial outing and a change of rear suspension helped improve his feeling for the second sprint. A better placing of ninth meant the same spot in the final MX1 ranking.

Desalle is third in the MX1 table and just 15 points behind Paulin while Strijbos is fifth and three points in front of Tommy Searle.

Rockstar Energy Suzuki World MX1 will now immediately prepare for freight with the factory RM-Z material due to be shipped to Beto Carrero where the Grand Prix of Brazil will entertain round seven of the FIM Motocross World Championship on May 19.