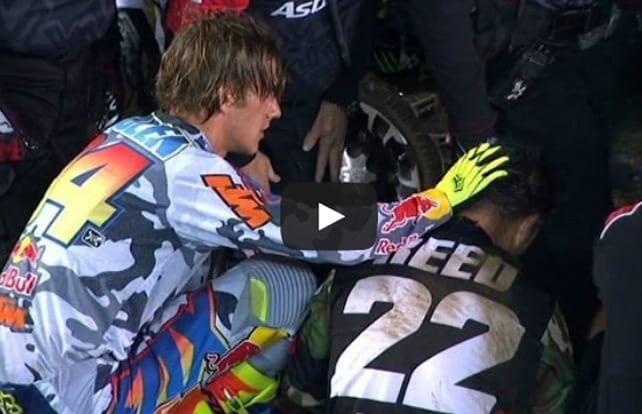 Reedy collided with K-Roc’s rear tyre and crashed while attempting to make a pass for third – hitting the up face of the jump hard with Dungey almost rolling over the top of him. Reed was unable to finish the race and Roczen’s concern for the former champ led him to go over to check on his wellbeing.

@RealSteveCox is that blood he spitting 🙁

Reed was taken to hospital and the popular Aussie kept his fans updated via his Twitter account. Initially saying:

Thanks for all the support and preyers! Still not 100% sure what’s up Trying to check myself outta hospital so I can go get scans X-ray&mri

The medical exams didn’t find anything broken but Reed, like all riders, knows his own body and clearly felt the need for further tests. In fact he appeared fairly unimpressed with the hospital and said on Twitter:

I’m not confident in this hospital so I’ll let y’all know when I know more..

Later Saturday night after tests at another location he confirmed that there were more to his injuries than first thought and also showed one of the reasons why this veteran pilot is just so popular – he’s one tough bloke:

Ellie posted on Instagram an image that contained the following message that really sums up the mind set of Team TwoTwo Motorsports: “Pain is temporary. Quitting lasts forever.”

And Ellie added: “3 broken bones. Scapula , collarbone & T1. @crtwotwo has a pain threshold that exceeds any normal rate but Who knows how the weekend will be. Racing at this level is tough on a healthy body. Unfortunately this is something he has experienced multiple times in his career. It’s far from pretty and watching ur husband cry in pain is something I don’t advise. But his heart would hurt worse by quitting. The kids and I will meet him in Dallas on Friday and we aim to stay in this fight. Our path is never the easy one but we will never give up. #22 #therapyweek #nevergiveup to me that’s already winning.”

No more news for now. Do you think Chad should rest up for a couple of weeks or is he right to try and get back out for the Dallas gate drop this weekend?

As Steve Cox said: “This is a really f*cking rough sport” and here at DBR we admire your strength, courage and determination Chad and Ellie. Get well soon Speedy Reedy.

Ken Roczen’s concern for a fallen competitor has already been touched upon but Reedy added this tweet recently.

Human 1st athlete 2nd #respect Just a racing move if I have the same opportunity this weekend or… http://t.co/YuoruufNIe

Although Chad Reed’s truck is already on route to Texas it’s still doubtful that Reed will be able to ride. Not that we doubt Reed. Hell no. If anybody can keep the fight going after that kind of damage to the body, then it’s this tough Aussie. But can anybody get on a bike and ride at the pace he’ll need when the gate drops in Dallas after that off?

As is the norm in life there appears to be a split opinion on Chad Reed and his team/family’s public sharing of what some would consider personal feelings. But we would like to focus on the positive.

Chad and Ellie’s social posts have been inspiring dirt bike riders. Here’s a tweet to Ellie from a Team CRtwotwo fan…

An official medical update is not available from the CRtwotwo Team but Chad posted two images to his Instagram account and it appears that he is staying positive.

Chad Reed said on Instagram: “Yep it still hurts! #4days.” And posted the image below…

Chad Reed said on Instagram: “I wanna be strong like ironman #hurting #iwannaride #injuriesareharderthantraining.” And posted the image below…

Ellie has confirmed that Chad will not be doing an autograph signing session during the weekend. He needs as much healing time as he can get.

Reedy added another post to Instagram during the night which shows his rig outside the AT&T Stadium, but didn’t offer any more information about his medical condition. We’ll keep updating the page so keep it bookmarked and follow us on Twitter and Facebook for news notifications.

Been a rough week to say the least! Who knows what the weekend brings all I know and can do is give it… http://t.co/0wy9cEMpUy

Meanwhile Ellie posts this: “Made it to Dallas crazy Tate. Ready to give Daddy done love and I’m sure a pep talk”

Then a few hours later Chad posted this on Twitter.

Today was the day Chad Reed would do his best to get back to racing and he did try. But it wasn’t to be and RacerX soon upset Ellie with a post the publication added to their own Instagram account.

. @racerxonline please don’t miss inform our fans ! You are very wrong and that IS NOT AN OFFICIAL STATEMENT ! I suggest u correct that ASAP

Chad then added two of his own tweets for his loyal fans. Like Chad we’ll have to wait on more tests to see where he stands for the weeks ahead.

Well we tried.. Went to go for a time and shoulder either popped out or the coracoid process pulled off which is what we were concerned bout

On way to get MRI and more X-rays now #bummed