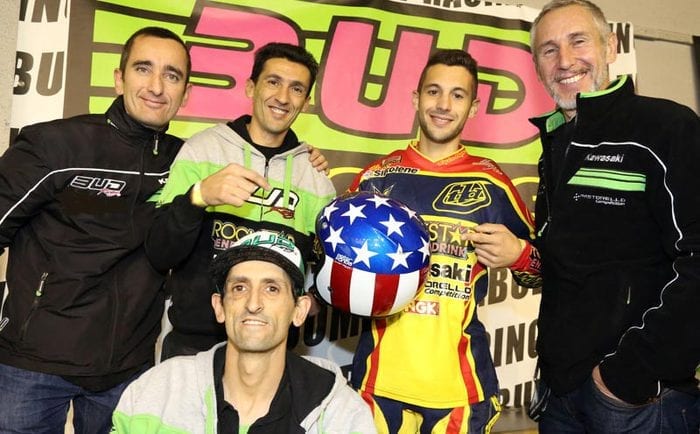 After five seasons in the MX2 FIM Motocross World Championship, team Bud Racing Kawasaki has new goals for 2014. As Bud Racing extends his business story in the USA with a racing shop in California, the team will now enter the 250 American Supercross series with Valentin Teillet.

Bud Racing is a company who like the challenges and rather than staying in Grand’s Prix they’ve decided to move in the US Supercross series. This is a thoughtful decision and it will allow the team to continue to get strong results with their 250 Kawasaki Bud, which has already claimed two GP podiums this season with Dylan Ferrandis and two French Elite titles (2012 and 2013).

Dylan joined another Kawasaki team but the Bud Racing team kept Valentin Teillet; the Frenchman can’t race the MX2 GPs anymore due to the age regulation but he wants to stay in this class and will race the American Supercross series. He already has some good results in the European Supercross and will enter the West coast series.

Valentin will fly to California in a few days alongside team trainer/mechanic, Jacky Vimond. He will be based in the Bud Racing USA workshop in California and will be at Anaheim on January 4 when the first round of the series kicks off in California. He will be back in France for the French Elite series and Bud Racing will present later his 2014 European and French program.

Valentin Teillet: “It’s a new challenge for me and I put all my energy to be ready for it. I raced the GPs during four seasons and I didn’t get the results I was expecting, so I enter now another challenge and I’m very happy to do it with Bud Racing.”

“I know the bike and the team, as we have worked together for two years now. I didn’t race so many supercross the past seasons as I was focused on motocross but since two years I did a few SX – I love this sport and I enjoyed riding Supercross. As many French riders I was dreaming to race one day the AMA Supercross, but I know that it’s a tough championship and I’m already working hard to prepare the season. I saw in Bercy – where I raced on a 250 among the 450 – what I must improve; it’s difficult to reveal any goal, as I never raced on a US track, which are different to the European ones. We’ll see when we’ll be in Anaheim for the first race!”

Stephane Dasse: “Honestly we were not very motivated to race another season in the GPs, so we took the decision to move to the US with Valentin. He will race the West Coast as our company is now located also in California. It’s a great challenge for us, but that’s only one part of our program as we’ll continue with the support of Kawasaki Europe to help young riders in the European 85 and MX2 programs.”

“We have always worked with promising kids, and we have with Jacky Vimond a great trainer to help them. Concerning the US program it’s like a dream for us to be there with Valentin, we’re happy to give him another chance, as he was not allowed to race the MX2 GPs anymore. Last summer we opened a Bud Racing shop in the US and we’ll use it for the team. Valentin will come back to France to race the French motocross and supercross championships, as there is no conflict with the dates, and maybe he will also race a few rounds of the AMA Motocross series in the US.”