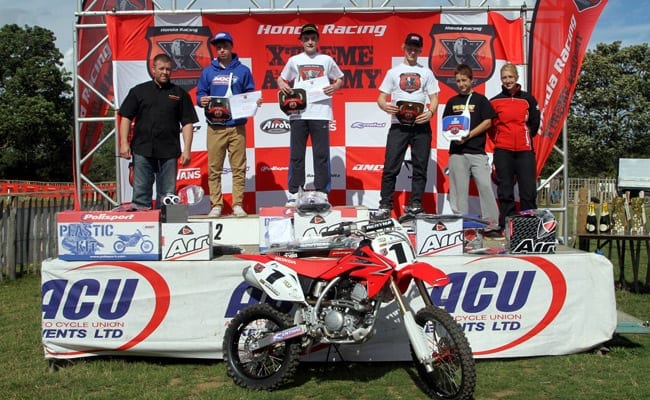 Going into the weekend Brad had a healthy lead but needed fourth overall to clinch the Xtreme Academy title over fellow competitor Jack Gardner. The youngster – who was also fighting for the BYMX overall title aboard his CRF150R – rode nervously in Saturday’s races but ended Sunday with a strong and calculated race win to take the Xtreme Academy championship after seven rounds.

In the BYMX big wheel class, Brad went into the final round with a lead of the smallest margins as just six points separated the top three. Fellow Honda rider and rival Jack Gardner romped to one victory and two second places on the Saturday to Todd’s 5-3-3 scorecard. Although Brad fought back on Sunday, they ended the weekend on equal points and Jack – who finished runner-up in the Xtreme Academy series – was awarded the championship due to winning more races throughout the season.

This year’s Xtreme Academy top four – Brad, Jack, Robert Davidson and Matthew Callaghan (who also received an Xtreme Academy Performance Award for his vast improvement in the second half of the season) – were all rewarded with a ton of prizes from sponsors One Industries, Vans, Airoh helmets, Renthal, Polisport, Racebikebitz and No-Toil as well as a total prize fund of £1,750.

“To win the Honda Xtreme Academy championship is just as good as winning the BYMX series for me and it was something I really wanted,” says Brad. “I’m so happy and the prizes are great – it’s been my best season so far and to come out with this championship and runner-up in Great Britain is really special to me.

“I finished 14th in the BYMX series last year but switching to Honda has been a massive boost for me and to be battling for the title has been great. I was really nervous on Saturday and I struggled a bit because I was trying to stay calm and not crash but to come away with this is just awesome.

“It was also good to come here after the training school with Brian Jorgensen as the tracks are quite similar and we definitely learned a lot to help us. So I’d like to say thank you to the Honda Xtreme Academy, my family and everyone who has supported me to get me here.”