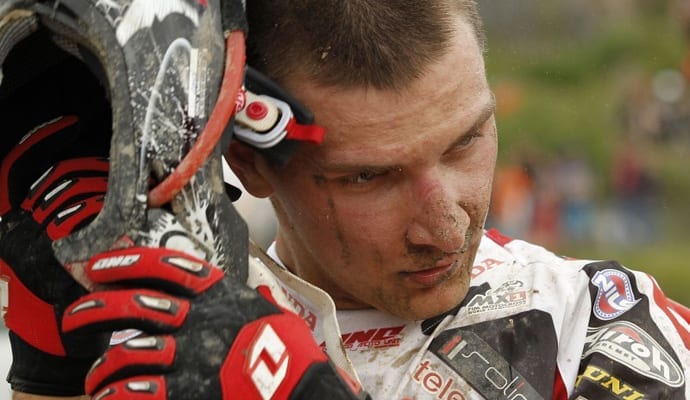 Teutschenthal in hosts ninth round of the motocross world championship where Honda’s Evgeny Bobryshev takes a dominant double win. After leading the first moto from start to finish Bobby has to work his way past Antonio Cairoli at the start of the second before powering away to victory although coming into the last lap an ultra-aggressive Cairoli tries for a pass. Bobryshev slams the door shut and crosses the line in first to a huge cheer from the enthusiastic German crowd. Cairoli claims second overall while Clement Desalle toughs it out for third on the Rockstar Suzuki.

In MX2 it’s tight at the top as the first four all trade positions over the two motos. When it’s all done and dusted though Ken Roczen’s 3-1 outscores Gautier Paulin’s 4-1 while Tommy Searle places third overall courtesy of a 3-2. Jeffrey Herlings keeps himself in the hunt for the world title with a 2-4. Behind the fast four are the Bike It Cosworth Wild Wolf Yamahaulers with Tonus beating Osborne on the day while GP returnee Jake Nicholls has his best ride of the year to go eighth twice for seventh overall – go Jake!

Other Brits in the results are Max Anstie 12th (MX2), Shaun Simpson 11th (MX1) and MX1 wildcard Brad Anderson 14th. Brit battlers Martin Barr and Alfie Smith fail to score while Nez Parker’s a non-starter on Sunday after damaging some neck muscles in a fall on Saturday – word is he’ll be back for Foxhill.

Evgeny Bobryshev – Honda World Motocross
“I am lost for words, I don’t know what to say or how to feel right now. It felt so good out there, I went into this zone where everything just came together and the laps were just counting down. I would like to thank the whole team and everyone at Honda for their efforts and support, it has been amazing. This is the best moment in my career for sure!”

Clement Desalle – Rockstar Energy Suzuki
“It was another difficult weekend for me. I was not feeling good after the qualification yesterday and it was hard with all the small injuries to keep a good feeling on the bike today. That is the key for me. If I can find the feeling and enjoy my riding then of course I will be fast. I’m not so happy with my current situation but it is good to come back on the podium!”

Steve Ramon – Rockstar Energy Suzuki
“Not much luck today. I had a pretty good start in the first moto but I made two mistakes on the first lap and some guys passed me. I wasn’t riding well today and didn’t have the power to push. It was tough. The second moto was about a bad start, a crash, pushing to recover and then making mistakes! I crashed together with Schiffer and from that point I just tried to get as many points as possible. Of course I’m not happy but I did what I could.”

Shaun Simpson – LS Honda Racing
“I feel it could have gone better. My goal this year is to push on for two top ten finishes and I’ve yet to do that, but on a positive note my speed was good yesterday and I was quite happy. My starts are still not good enough and that is a major factor of this MX1 class. I was about eighth on the first lap in both motos and struggling a little bit with my pace in the second race. I dropped back a bit but fought on and passed a few riders towards the end. It has not been a great weekend but at least two scores, close to the top ten and I need to take confidence and keep smiling!”

“I won the first race and I got the holeshot in the second. Then I crashed in the first lap, I was back at 16th and it’s hard to pass on this circuit. I managed to come back to third and won the overall so I could make a bigger gap in the points to Jeffrey.”

“To be honest I battled with my riding on Saturday and could not ride how I wanted to.  We made some bike setup changes and I felt much better today.  I should have had a better result in the first moto and put myself in a position to win the overall.  The second moto was great.  That’s what we all work for and winning the moto has given the team and me and big confidence boost.  The next step is to win a GP of course and with the new engine improvements Yamaha has given me we are in a very strong position now.  I’m looking forward to Latvia this weekend.”

“I’m satisfied with my riding and although I finished behind Ken I was still able to keep up with the same speed and I didn’t lose too many points. I also like the changes that they made to the track here. Now I go and train in the sand because we’ll be racing in sand next weekend in Kegums and that’s my specialty.”

Steven Frossard – Monster Energy Yamaha
“In the first moto my start wasn’t so bad and I was happy with how I could attack quickly. I was trying to pass Nagl for a long time and then Cairoli arrived. I pushed a lot at the end of the moto to get Nagl and could do it on the last lap. I was pleased with the race but I messed up the GP by hitting the gate at the start of the second moto. I was last and tried to come back but I wasnt feeling so good on the bike. Yesterday I crashed and hit my head and I felt tired in that second race. I was coming back through OK but then I made a mistake and stalled the engine. I had to push the bike down the hill to restart and ended up fifteenth. It is a bit difficult to accept because last week I won both motos and closed up with points for the championship. Now, like in Glen Helen, one mistake has caused me to lose a lot.”

“My luck doesn’t change! We had another brake problem in the first moto and then at the start of the second Steven was next to me and started to go. He hit the gate and mine did not drop so I also got caught. I pushed back as hard as I could and reached eighth with some good lap-times. The track was pretty easy in some ways, which meant the times were very close. There were many people here today and this was crazy! It was like a Motocross of Nations.”

Arnaud Tonus – Bike It Cosworth Wild Wolf Yamaha
“It has been a good weekend overall. I had a good race on Saturday. The first race saw a decent start and nice rhythm but then we had a small problem with the bike when the hand-guard came up and was stopping the clutch lever from going out fully. I did what I could from that point. I was up in second at the beginning of the second moto, which was amazing, but I made a small mistake. I was a bit disappointed and found it hard to get back in the race. After twenty-five minutes it was much better and I could catch Zach and pass him but it was a tough one. I’ve been consistent for the championship but this was a missed chance. It was great to see so many people here and a noisy crowd like that.”

“Usually I take some time to settle down in the first laps of a race and that is what happened in the first race. I got through quickly to third place, but the leaders were setting a really fast pace so I had no chance to catch them again when I settled into my rhythm. The second race was more difficult, but it was the best I have ridden for a long time. It started when Jeffrey Herlings made a mistake in the second corner and unfortunately I was right behind him. I couldn’t do anything except wait, so I was maybe seventeenth at the first split, but I was really fast and pushed really hard. I was happy with my riding and felt comfortable on the bike. I was able to push hard for the entire race. I think I had saved some energy in the first race so I was able to push until the end and take a good second place. This track has never been my favourite; it’s always tricky and a tough track so I’m happy with this podium.”

“I had a tough day on Saturday, as I have had all season on tracks which I do not know. It inevitably takes me time to learn the tracks, but we never stop working to improve the results. Qualifying was not so good, and that’s so important today to get a good position on the grid. In the first race I hit the gate and then did a wheelie so I had to come from a long way back and it was difficult to get into a good rhythm passing those guys back there. In the second moto I never gave up and I passed a lot of guys to get into the top ten; for sure with a better start it could have been a top five. It was hot today, but that was not a problem for me even if the track was tough. There were many ruts, but that’s the same for everyone.”

“I had a good speed this weekend and took some good points, in fact I had a good feeling all weekend. I like this track but on Saturday I almost crashed during a practice session; I put my leg on the ground and then I had pain in my knee. The start is so vital here but in the first moto I was able to make some good passes to finish eighth. The second race was even better with a sixth placed finish. Now I will move to Belgium to prepare for the next races in sand, normally I am good on these tracks so I am optimistic of good results there.”

“For sure my results are not what I was expecting from this weekend. I came here confident as I got great results here last year, but the track was a little bit different, softer than before, and I was fighting the track all weekend. I never really got into the first race, but I made a good start in the second race in the top six but then I crashed on the second lap. The bike was in the middle of the track, and I lost a lot of time to get back to it; I had to come back from thirty fourth to seventeenth; that’s not many points but it was important to finish the race.”

“It was nice to be back in the GPs, even if the tracks are so different from those in the US. I qualified in sixth position and got twice took a top ten start, but in the first race I got hit by too many stones on my upper body and retired. The track was very different for the second moto, and our settings were not working as well as I would have liked; we’ve only been testing a few hours since I came back from USA last week, and I need to work more with the team to set up the bike to my style and the European tracks.”