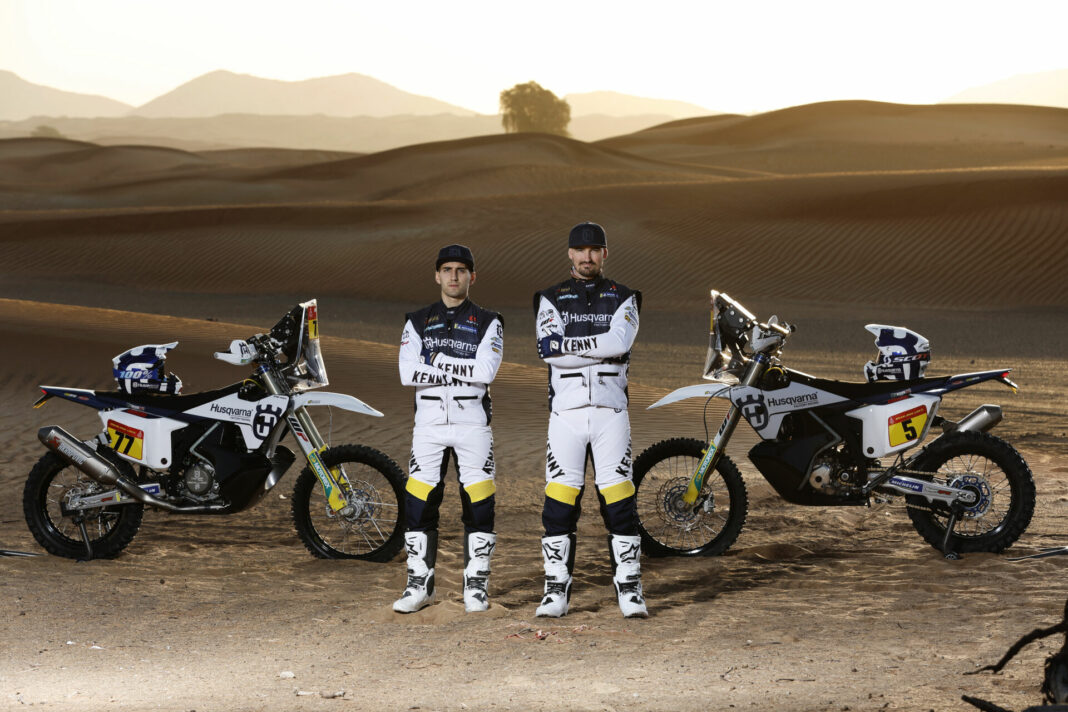 Luciano Benavides and Skyler Howes will represent Husqvarna Factory Racing at the world’s toughest off road motorcycle race, the Dakar Rally with the two-man team set to compete on the new FR 450 Rally.

With just over two weeks to go before the biggest rally event of the year, Husqvarna Factory Racing are all set to take on the iconic event, held in Saudi Arabia for the third successive year. Armed with the latest edition of the Husqvarna FR 450 Rally, Benavides and Howes hope to start their 2022 seasons strongly with top results at the Dakar Rally.

Crashing out of the 2021 Dakar on stage nine, Luciano Benavides was forced to spend the start of his 2021 season recovering from an injury to his shoulder. Determined to get back on the bike and back racing as soon as possible, the young Argentinian returned to competition at the first round of the FIM Cross-Country Rallies World Championship in Kazakhstan, where he claimed an impressive sixth place overall.

A solid seventh-place result at the Silk Way Rally further increased Benavides’ confidence and he was able to carry that momentum into the Rallye du Maroc where his consistency enabled him to secure another top-six finish. Now, heading into the 2022 Dakar, Luciano is back to full fitness and feels more motivated than ever to secure his best result at the legendary event.

Signing for the Husqvarna factory in April, Skyler Howes competed in his first international event for the team just over one month later at Rally Kazakhstan. The likeable American immediately impressed, converting his speed and enthusiasm into two stage wins.

Gelling well with the team and with the bike, Howes continued to deliver strong performances for the rest of the world championship season, mixing it with the more established racers while also gaining valuable experience along the way. Securing fifth place and finishing as the top privateer at the 2021 Dakar, Skyler is now looking forward to competing at the event for the first time as a fully supported factory rider and will be hoping to make the best use of his excellent navigational skills on the technical terrain while fighting for a top result.

Marking the first round of the 2022 FIM World Rally-Raid Championship and awarding extra points due to its classification as an FIM Marathon Rally, the 44th edition of the Dakar is building up to be more important than ever. Covering 12 stages from January 1 to January 14, and totalling close to 8,000 kilometres, the race promises to provide the ultimate test of endurance, speed, and navigation as it travels through the Saudi desert.

Luciano Benavides: “2021 has been a long, tough year for me. It started well with the Dakar where I had good speed, but then my crash forced me out of the event. It took a lot of rest and training to get my shoulder up to strength, but thankfully I was able to get back on the bike quite early on and begin to build my pace again. The first couple of world championship rounds went ok at Kazakhstan and Silk Way, I was able to slowly build my confidence, but I knew I was a little bit off the pace. We spent a lot of time in the middle of the year developing the new bike and then when we rode it in Morocco it was definitely a big step forward for me. Not only did the bike perform really well, but it also helped me and my confidence – I felt comfortable straight away and from that the speed came more easily. The team have done an incredible job – many hours working and testing and I’m pleased with the result. Now, looking ahead to the next Dakar I’m happy with where I am both mentally and physically, and with my speed. The bike and the team are working really good right now, so I believe we have an excellent package for Dakar and will be able to fight for strong results. For sure, it’s going to be tough as always, but this will be my fifth Dakar and I think I’m better prepared than ever.”

Skyler Howes: “The year has gone really well for me – it’s been my first season as a factory racer and that has made a huge difference, it’s been great to just focus on my racing, which I feel is reflected in my results. Going into the Dakar in January, I’m definitely more prepared than I ever have been, but at the same time my goals remain the same – give it my all, stay safe, but try to come out the other side with the very best result possible. The Dakar is tough, and you can pretty much guarantee you’re going to have difficult days. The key is to keep looking forward and focus on that final result – that’s what keeps me going and keeps me motivated. The new bike we have been developing throughout the year has been another massive improvement for me. In years past, I’ve just turned up at the Dakar and often ridden a bike for the first time at that event. Now, I’ve been given the chance to not only spend a lot more time on that bike, but also have a massive input into its development. That’s had the effect that I feel really at home on the new FR 450 Rally and I’m looking forward to taking it to Dakar. At the end of the day, I’ll be happy if I give it my all and have fun, hopefully the final result will reflect that too.”