Home News Motocross Back in the USSR 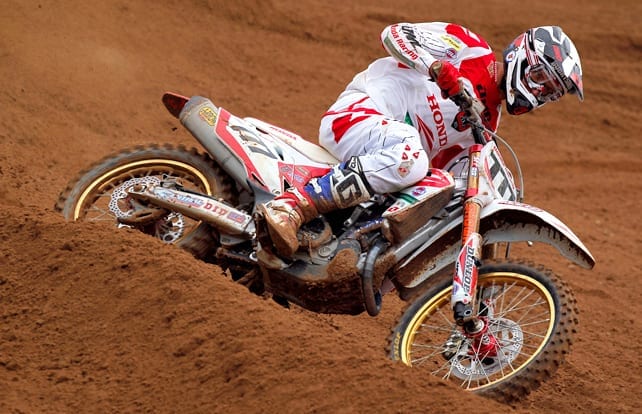 Well, kinda, except we call it Russia these days but what the hell. Dunlop has press released this weekend’s Russian MXGP and it’s prompted us to preview this weekend’s circus show.

It’s been a while in fact since GPs raced on Russian soil, the last time was at Sorochany when two-strokes still dominated a decade ago. This weekend a very different noise will greet ‘home hero’ Evgeny Bobryshev’s fans at the Semigorje circuit, 400km north-east of Moscow – 8,000 of whom have watched a 3D light show beamed onto the walls of a residential complex in the nearby city of Ivanovo.

Bobryshev’s 2011 German GP victory for Dunlop may have been the first win for a Russian in 31 years, but Russian riders were at the forefront of Motocross during the 1960s and ’70s. Victor Arbekov was the first to be crowned World Champion in 1965 in 250s, while Guennady Moisseev won three 250 titles in the 70s.

But that’s enough waffling from us, here’s the snippets from Dunlop’s press release;

Following a season dogged by injury, Goncalves posted a season-best third in the opening moto at Kegums – when he was the first of three Dunlop riders in the top five. The Portuguese again led the ‘Yellow Cap’ challenge in moto two, taking fifth place on the rough and rutted sandy surface, softened by a heavy shower.

Equal on points with race two winner Kevin Strijbos, Goncalves was denied third overall by the second moto tie-break. But that didn’t diminish his delight.

Goncalves said: “I’m super-happy with the way things have gone and with the way I was able to put together two consistent motos. I knew it was important to get good starts and that’s what happened in the first race. I didn’t repeat the good start for the second moto, but I kept consistent and made the passes when I had to. I really want to thank the team for the support they gave me.”

That yielded fifth overall and the Frenchman remains a close fourth in the World Championship, just nine points from third. Paulin said: “I had a good feeling with the track on Saturday, but the rain on Sunday made conditions very different as there was mainly only one line. Fifth is not what I was expecting, but at least I have moved closer to the top three in the standings.”

The only full time Russian rider in MX1, Honda hero Bobryshev is sure to be the focus of attention in front of his home fans.

Much like team-mate Goncalves, Bobryshev’s 2012 campaign has been hampered by injuries, incidents and bad luck. But fifth in race one at Kegums marked his joint best result of the year and ‘Bobby’ is out to impress this weekend. Bobryshev said: “I have a big week now and I’m very busy in the days before the Russian Grand Prix. We then head to the track and I hope I can get a good feeling to be able to make a nice race for all the fans.”

Not a dirtZone member? It’s free to join and get involved. Plus – it only takes a few moments to sign up.