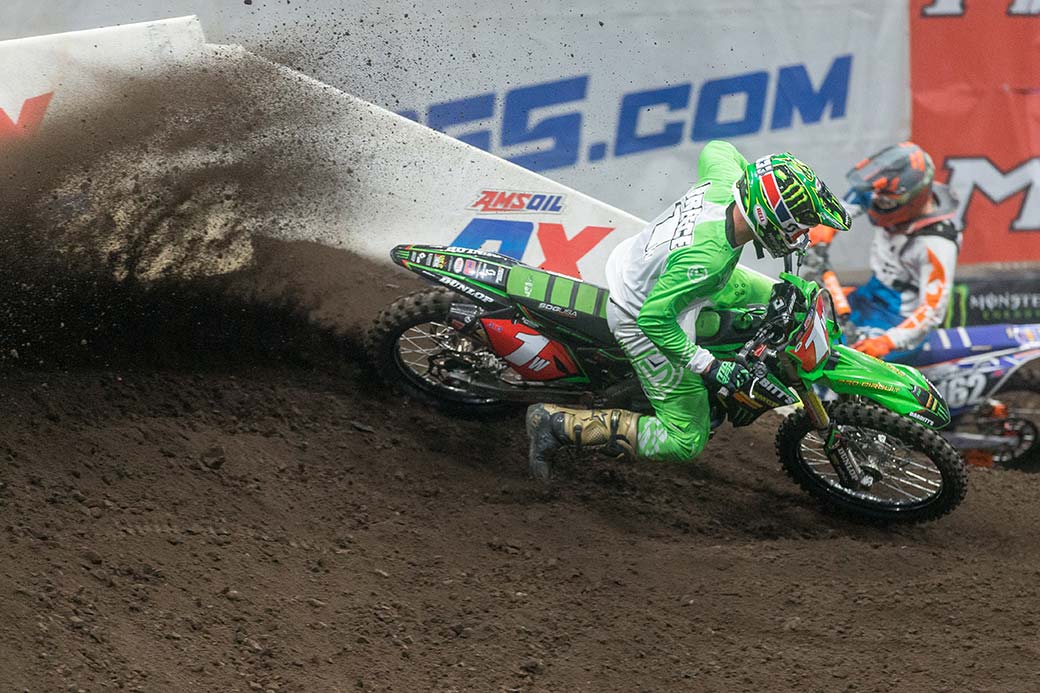 AMSOIL Arenacross hosted the third round of the Race to the Ricky Carmichael Cup inside Veteran’s Memorial Coliseum in Portland, Oregon.

The first 250AX Main Event saw Hayes and Blose side-by-side in the first turn through the whoops; Blose was held up high on the E3 Spark Plugs Born to Burn turn and lost vital positions to Hayes who quickly extended his lead. After starting Lap 1 in ninth place, Blose worked his way into the top three and soon was battling with Motosport Hillsboro Custom Power Sports rider Gerad Steinke for the second-place position. A slight error by Steinke moved Blose into second as Hayes took the Main Event win followed by Blose, Steinke and TZR Sportland 2 rider Travis Sewell finished fourth.

The second 250AX Main Event saw Blose and Hayes out front again, but on Lap 3 Hayes had a mishap right before the rhythm section, losing positions to Blose who extended his lead early on. The race for second between Steinke and Sewell was brewing throughout most of the race as the duo battled back and forth, creating constant contact and banging bars in each turn. Meanwhile, Blose led all 15 laps to take the second Main Event victory with Sewell in second, Steinke third and Hayes fourth.

Earlier in the evening, Blose secured the Rocky Mountain ATV/MC Head 2 Head Challenge victory point, helping him to secure the overall and retain the red plate heading into the next round in Reno. Hayes salvaged enough points to finish second overall while Sewell rounded out the podium.

In the fourth round of the AX Lites West season, the Main Event looked like it was going to be a repeat of the last three rounds with GPF Babbitt’s Online rider Ryan Breece grabbing the holeshot and the early lead until a mistake right before the rhythm section forced Breece to lose a few positions, moving him back into fourth. Custom Powersports rider Mason Kerr took over the lead with Rockford Fosgate TiLube Honda’s Carson Brown close behind in second. Brown charged to overtake the lead with five laps to go and took his first AX Lites Main Event victory of his career. Kerr followed in second while Breece finished third.