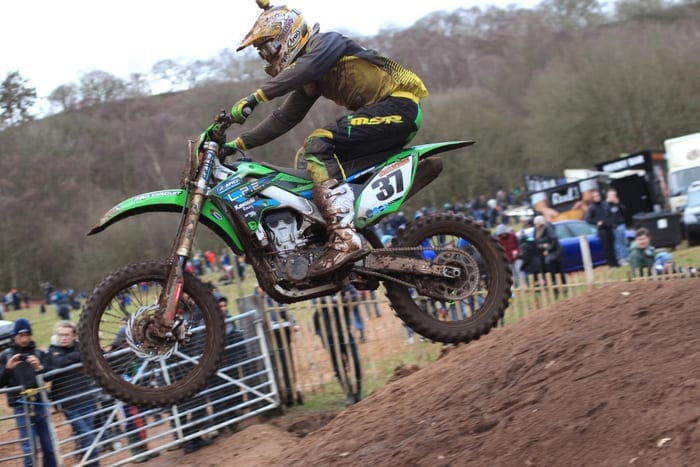 Following on from the recent success of winning the Arenacross Championship the Apico LPE Kawasaki headed to the Hawkstone International for the first of their outdoor events with MX1 rider Gert Krestinov.

After a long wet winter the British public turned up in their thousands to show their support after the bitter disappointment of having to cancel last year’s event.

Coming into the event Krestinov was feeling confident after a second overall finish last weekend at Lommel. The day started with practice and qualifying, with the recent wet weather the club had left the track sealed making it very smooth and fast for the timed session. As the session went on Krestinov posted a number of first lap times to finish the session in eighth place.

With a good start position, Krestinov looked for a good start and rounded the first corner inside the top 15 and with a lot of work to do in the opening laps. Gert quickly settled into the race and began to pick riders off and moved into the top 10 and continued to push forward. With five minutes, plus two laps of the race left, the Estonian was in a battle for fifth place and closing on Herjan Brakke to make the pass for fifth on the last lap of the race.

The fifth place in the opening race gave Krestinov something to work on and as the gate dropped for race two. This time around Krestinov made a better start and quickly moved into sixth place. As the race went on Gert was able to find some new lines and close the gap on fifth and secure another fifth place finish. The two fifth places gave Gert fourth overall on the day in MX1 – only to miss out on the podium by 1 single point.

The final race of the day was the Superfinal where the 20 fastest MX2 and 20 fastest MX1 riders race together, with the MX2 riders being released first. When the gate dropped for the MX1 class Gert made a great start to round the first turn third in (MX1), only to get caught in the carnage of a MX2 crash in the second turn.

Gert remounted towards the back of the field and was forced to pit to straighten the bike and restarted the race dead last. From that point on Krestinov charged as hard as possible to recover places, passing riders, left, right and centre. Once inside the points, Gert continued to show his fitness passing from 15th to finishing in seventh in the last three laps of the race. His seventh place finish also saw him finish as the fourth MX1 rider home and he set the third fastest lap time in the race to round off a very productive day for both the team and Krestinov.

“This weekend has been good,” said a delighted Gert Krestinov, “I got a good gate pick after the qualifying session when the track was really smooth. Then in the first race I made an okay start and then pushed forward to fifth and was riding okay but should have pushed harder.

“It was really similar in the second race and I finished fifth again for fourth overall and that was mine and the teams aim, to come away with a top five overall over the two MX1 races and we was all very happy with that result.

“Then in the Superfinal unfortunately I crashed into a MX2 bike and went over the bars and had to pit to straighten my levers out. From then I just wanted to use it as a training moto and push hard and I had a really good pace to come from last to seventh, so it’s been a very productive weekend for testing and to move forward from.

Team Manager – Steve James commented: “We came here this weekend to judge Gert’s speed and fitness plus to test out his race bike against some very good competition and it’s been very productive.

“We have come away with fourth overall in MX1 and just one point away from a podium which was awesome as we had aimed high at our target of a top five finish, so it’s a very positive feeling on all three counts.

“The bike is working great and Gert is very happy with how everything is going, both engine and suspension wise. Then in the last race, the Superfinal, Gert went down with some of the MX2 guys on the opening lap and had to pit to straighten the clutch lever etc and restarted dead last. He then rode a very impressive race to get back to seventh in the race and fourth MX1 machine home.

“He rode very well in that race and showed some raw speed so overall I’m really happy with everything – it was a great day and a very worthwhile trip.”