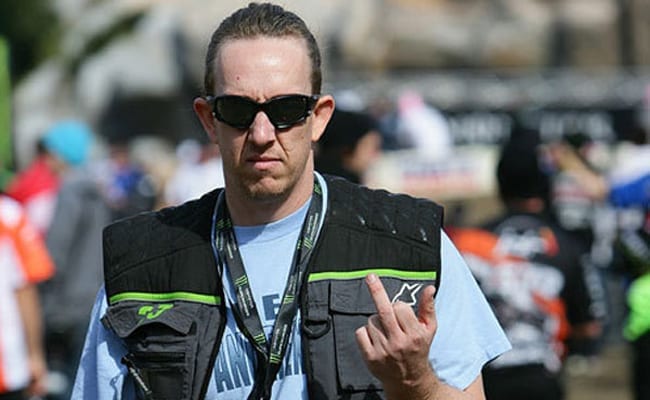 Texas always seems like it’s the most miserable place to visit on the AMA calendar whether it’s in the winter during supercross or the summer with motocross.

Let me give you an example. Last year the Dallas Supercross – the first year it was held in the new Cowboys Stadium – was held during a full-on blizzard. The snow was coming down. Actually, that’s not accurate. The snow was going almost directly sideways. So much so that the light poles all had snow packed on one side of them, from top to bottom, while the other side had no snow on it whatsoever. It was freezing.

In the span of two months it went from miserable blizzard to miserable heat. Both of them made me want to get home to California where it’s almost always about 80 degrees (again, in metric, no idea) and partially cloudy.

This year the supercross was less miserable – although it was a bit too hot and muggy – but the motocross was just as miserable as ever. It was just as hot as last year but seemed slightly less hot because of the crazy wind which cooled you down as it helped to evaporate the sweat off your body. But the trade-off was a massive amount of dust in your eyes, ears and everywhere else. All day.#

And when I landed back in California the Sunday after the race it was 72 degrees, partially cloudy and absolutely beautiful.

This is why houses and land are cheap in Texas and they aren’t in California. Because you have to live in Texas.

And the other thing about Texas is that everything is two hours from everywhere else. There’s nothing nearby anything else. It’s as if they decided ‘hey, we have all of this land, let’s use ALL of it even though we don’t have much in the way of population’. At least the Australians leave the entire middle of their country empty. The Texans didn’t get that memo. And they’re proud of it, too. They love it. ‘Everything’s bigger in Texas,’ they say. Yeah, everything is. Including tumours, headaches, depression and the zits you get on your ass from sweating all damned day while dust flies up your shorts.

In short, screw Texas. That place is terrible. Please, AMA, don’t make us go back there, ever. Please…