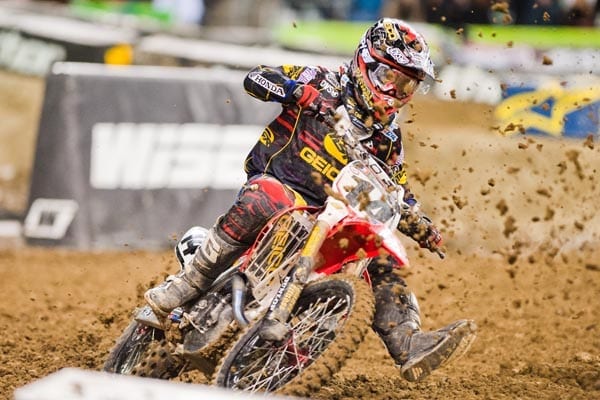 There’s an old saying that says ‘the cream always rises to the top’. I’m not sure that’s technically true but as far as the 2011 Monster Energy AMA SUpercross Championship is concerned it is…

No one can get up between the top four guys in points now that the fifth-place guy Trey Canard is out with a fracture to his femur. Well, except for Kevin Windham. The 33-year-old motorcycle master is always a threat when track conditions are tricky and they definitely were tricky in Seattle – as they usually are. Windham won in Seattle last year and this year he finished second. Ruts are Windham’s friends.

But even with Windham getting in the mix, the guy making the headway is James Stewart right now. He has won two-straight races and he’s now only nine points out of the points lead although he is still fourth in points.

With only three more points given to a race winner over second place and with only two rounds remaining this means that the guy who is on the move right now – James Stewart – is going to need help to win this title. If Ryan Villopoto finishes second the next two weeks he wins the championship. This is regardless of who wins the next two rounds.

He has six points to spare over Reed. If Reed wins the next two rounds, Villopoto will tie him for the points lead and win on the first tiebreaker which goes to the racer with the most wins. Villopoto has five. Reed, if he won the next two would have three.

So, regardless, Villopoto is still in the driver’s seat and with the way things are going, if Stewart wins the next two races, Villopoto is just going to have to make sure that he stays in front of Ryan Dungey and Chad Reed.

However, knowing Villopoto he’s going to go out and try to win Salt Lake to take the pressure off in Vegas.