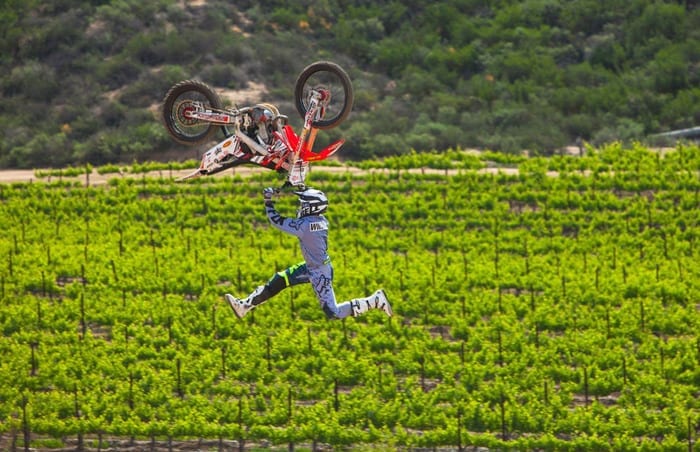 It will be hotter than hot in Stockholm’s Tele2 Arena when the FMX stars get ready for their show! Just like their supercross colleagues the freestyle riders are stoked to show the real thing to the European fans.

No small run-of-the-mill stuff but only huge hardcore tricks to get the blood pumping! Wilson and Carter will be joined by Japanese FMX-Samurai Daice Suzuki. More FMX riders making their appearance at the inaugural 24MX International Supercross and Freestyle MX on October 11 will be announced later.

Brody Wilson started relatively late on a dirtbike, but progress in FMX came quickly when he switched from motocross at the age of 19.

Already in 2009 Wilson took the coveted Rookie of the Year title and he has made a name for himself in the X-Games, Red Bull X-Fighters and riding on the Nuclear Cowboyz tour.

24-year-old James Carter has seen a lot in his six-year pro career: the biggest FMX events around the globe, sold-out crowds and injuries.

Carter has earned first place at the ASA World Championships, X Pilots and an IFMXF event. After an excellent 2013 season James only seems to get stronger and stronger.

He’s looking forward to going to Stockholm and showing the Tele2 Arena his best tricks. We can’t wait to see his signature trick, the “Holy Grab” in which he completely lets go of the bike to fly parallel before pulling the bike back at the last second. You must see it to believe it!