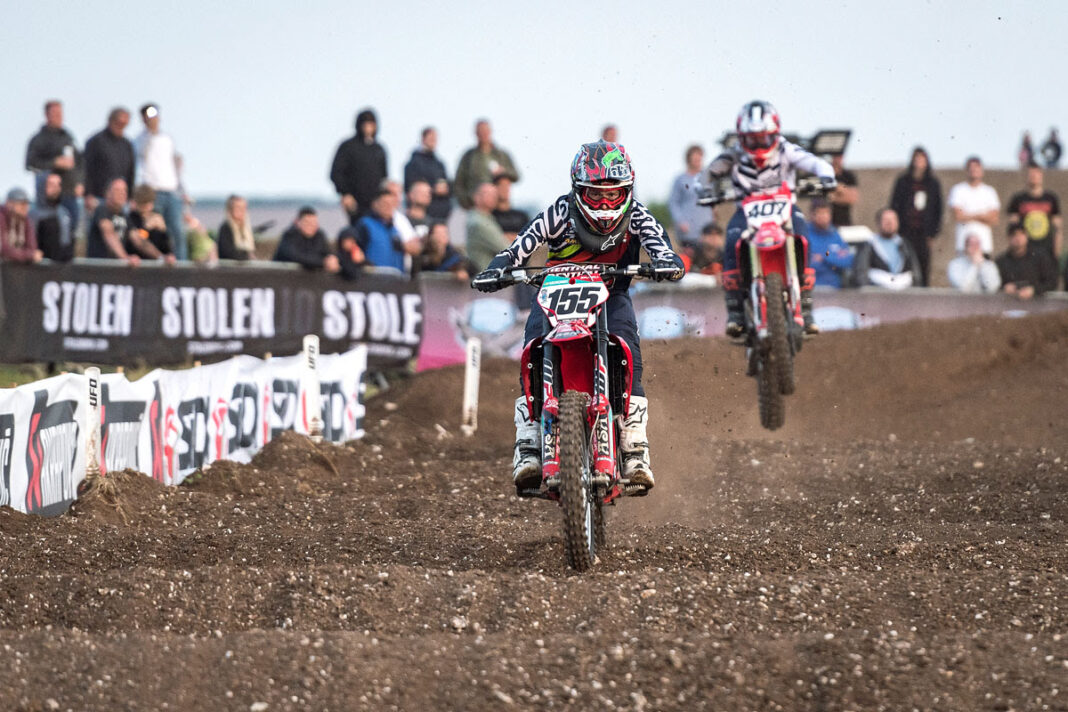 After the date announcement back in September that the second Airborne Gunner Summer Supercross series till take place on August ninth, rider entries are now open.

Riders will receive an email with a link to enter the Supercross, which will again run the day before the increasingly popular ‘Rock it til Sundown Summer MX Classic’, helping to generate a festival feel. Both events will again be held at the immaculate prepared Cusses Gorse MX circuit, near Salisbury. Entries on any available remaining spaces will open up to everyone on Friday tenth of December.

Once again there’ll be classes catering for everyone from auto riders up to the pros and the ‘Revvi Cup’ electric bike races, which were a huge hit with the fans, will be back for the toddlers to get their first taste of racing in front of a crowd. On top of that, the Steel Hawk MCC team will also be laying on Supercross only training and ride days for those who enter the ‘Airborne Gunner Summer Supercross’ so racers can improve their skill set and prepare for the event.

“Like anything you try for the first time, you’re never completely sure how it’s going to turn out. Our first running of ‘Airborne Gunner’ went really well all things considered and we’re confident we can build on it. We had a lot of people come out to watch, the racing was entertaining and looking around the place there were a lot of smiling, happy people, so it really felt like we were doing something positive for the sport.” explained Jeff Perrett.

“The Revvi Cup races were awesome and personally gave me a buzz seeing the whippersnappers getting into the sport, so I’m pleased to say they will be back and we’ll look to do more Revvi races throughout the year, starting in February with the ‘Farmboy Bash’ down in Devon. The ‘Fox Cool Whip’ competition to wrap up the evening show was a lot of fun too so that will be back.”

“We had incredible support from Lenny Woodcock and Ben Mahoney at www.stuntflying.co.uk stepping up as title sponsors and without them, we wouldn’t have been able to get it off the ground, along with Jake and Guy Nicholls at www.tru7.com and Jack Brunell who put up some money and that awesome memorial trophy in memory of his dad Melvyn. All those guys believed in us and we want to repay their faith by establishing the event and growing it.”

“We’d love to do more than one Supercross event and we’ve thought long and hard about it and how we’d do it, but for now just doing a one off event alongside ‘Rock it til Sundown’ works for us, unless a major sponsor comes out of the woodwork to support a ‘Airborne Gunner’ Supercross series we’ll put that idea on ice for 2022.”

What we can and are willing to do however is have a few Supercross ride days for the riders that enter the event and offer up some training from some of the U.K’s top pro riders like the defending champ Jack Brunell, Dylan Woodcock and Adam Chatfield. Supercross is a different discipline than Motocross and if we’re going to grow a scene here in the U.K we need to get people learning the techniques and getting more comfortable with it.”

“We share a vision with Justin Barclay at Cusses Gorse and it feels like we’ve laid a foundation by building the track and staging a successful event, so we’re going to continue to work hard and do all we can to get more people into it. I’m excited for it, I’m excited about all the events we lay on and getting stuck into them for 2022. Paul, Julie and myself are passionate about laying on different events to the norm here in the UK, if we weren’t then Steel Hawk Motorcycle Club wouldn’t exist, so we’re extremely motivated.”

Entries for the 2022 ‘Airborne Gunner Summer Supercross’ are now open for riders who rode in 2021 and will receive an email with details how to enter. If you don’t receive an email please let us know via paul@steelhawkmc.cc.